This painting depicts a portion of the Tingari cycle, a very important collection of Dreaming narratives from the Western Desert region. The country that this painting depicts is located far to the west of Yuendumu, and spans a vast area of land across the Gibson and Great Sandy Deserts in Western Australia. Aboriginal groups that paint the Tingari cycle include the Pintupi, Kukatja, Ngarti, and Walmajarri peoples, among others.
The Tingari cycle consists of three major Dreaming tracks. One begins west of Jupiter Well and eventually runs due east, concluding south-east of Lake Mackay; another heads south-west from near Kintore for some 200 krn, and then doubles back to end at Lake Macdonald; the third runs from south to north through Docker River and Kintore.
The cycle tells the story of a group of ancient creation ancestors, the Tingari, who travelled across the country.
The Tingari took different forms, some human and some animal. Humans were typically initiated men accompanied by ‘punyunyu’ (novices, uninitiated men). The men were sometimes accompanied by extremely powerful initiated women (called variously the ‘Kungka Tjuta,’ ‘Minyma Tjuta,’ or ‘Kanaputa’). Like the initiated men, these initiated women were accompanied by uninitiated women to whom they provided a ritual education. Animals featured in the Tingari cycle include the dingo, emu, kingfisher, and western quoll among others.
As the Tingari travelled over vast areas of the country, they held initiations and other ceremonies, caused or encountered raging bushfires, hunted game, found and cooked bush-tucker, fought and killed one another, disposed of the dead or brought them back to life, interacted with totemic ancestors, copulated illicitly, made and used sacred objects, flew through the air, and died in hailstorms. In the course of these adventures, they either created or became the physical features of the sites they visited, forming rocky outcrops, waterholes, trees, salt lakes, ochre deposits, and so on. These sites which are now regarded as sacred by their descendants, today’s custodians of these places. The Tingari also laid down social custom and law as it should be practised today. Their journeys form the basis of sacred and secret men’s and women’s laws. Public paintings of the Tingari cycle typically only show the unrestricted portions of these stories.

Traditional iconography is used to represent the Dreamings, associated sites, and other elements of the Tingari cycle. In many paintings of these narratives, concentric circles represent soakages, rockholes, ancient wells, and other water features. Lines indicate rainfall and grasses that provide edible seeds after the rain, or routes taken by the Tingari as they travelled. People are represented by semi-circles. Sets of circles can represent the body-designs of the older men who are painting the bodies of the younger men, often represented as smaller circles. 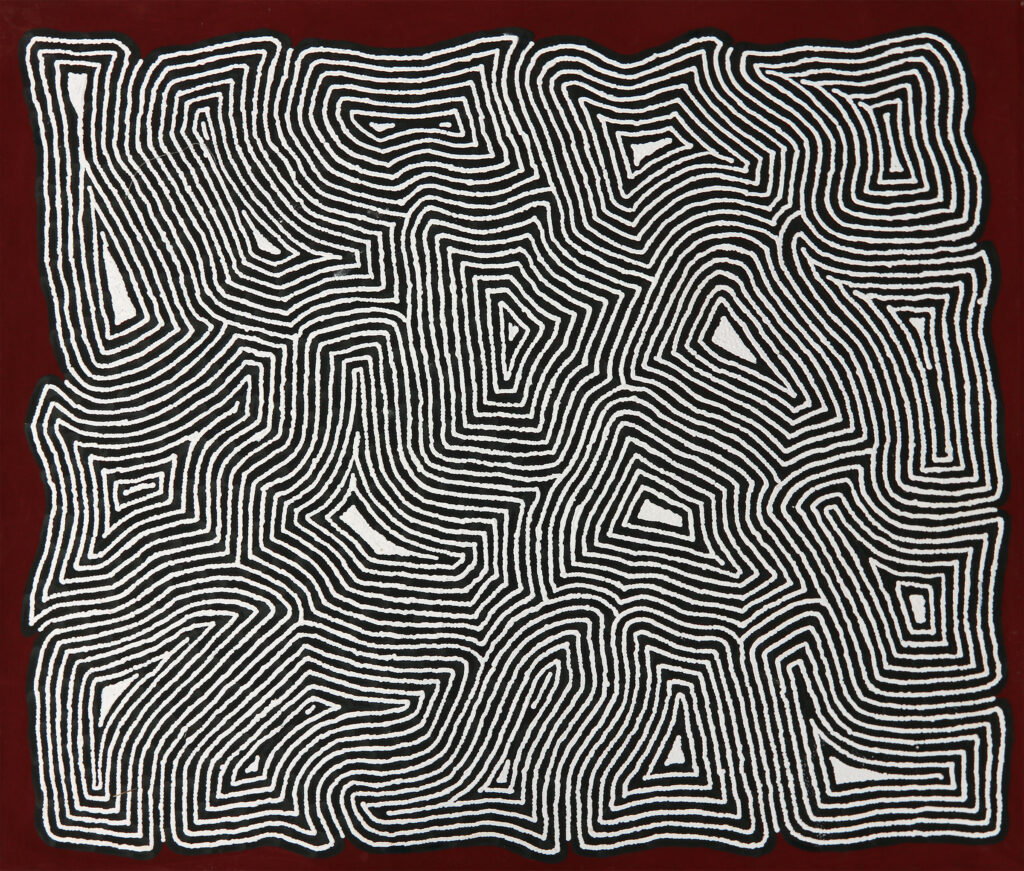