This ‘ngalyipi Jukurrpa’ (snakevine [Tinospora smilacina] Dreaming) comes from Mina Mina. Mina Mina is an extremely important ceremonial site for Napangardi and Napanangka women that is located approximately 600kms west of Yuendumu, just east of Lake Mackay and the WA border. The area has a ‘marluri’ (salt lake or claypan) that is usually dry, without water. There are also a number of ‘mulju’ (soakages), sandhills, and a large stand of ‘kurrkara’ (desert oaks). The Mina Mina Jukurrpa is an important source of Warlpiri ritual knowledge and social organization, particularly relating to the different roles performed by men and women.

The Mina Mina Jukurrpa tells the story of a group of ancestral ‘karnta’ (women) who traveled from west to east. In the Dreamtime, these ancestral women danced at Mina Mina and ‘karlangu’ (digging sticks) rose up out of the ground. They collected these digging sticks and started travelling to the east. They carried their digging sticks over their shoulders and they were adorned with ‘majardi’ (hairstring belts), white feathers, and necklaces made from ‘yinirnti’ (bean tree [Erythrina vespertilio]) seeds. They continuously anointed themselves with ‘minyira’ (shiny fat) to increase their ritual powers as they went along. As the women travelled, they were followed by a ‘yinkardakurdaku’ (spotted nightjar [Eurostopodus argus]) from the Jakamarra subsection. The bird would call out and then hide in the bushes behind them as they travelled.

When the women danced at Mina Mina, they created a large dust cloud that swept up the ‘walyankarna’ (snake ancestors). The ‘walyankarna’ had previously transformed themselves from witchetty grubs into snakes at Kunajarrayi (Mount Nicker, 200km southwest of Yuendumu), and they had stopped at Mina Mina to watch the women dance. This dust cloud blew the ‘walyankarna’ further north to Yaturluyaturlu (near the Granites gold mine). In this way, the ‘karnta Jukurrpa’ (women’s Dreaming) and ‘ngarlkirdi Jukurrpa’ (witchetty grub Dreaming) intersect. This allowed the ancestral women to observe the witchetty grubs and learn how to best locate and cook them, which are skills that Warlpiri women still use today.

The women went east from Mina Mina, dancing, digging for bush tucker, collecting ‘ngalyipi’ (snakevine), and creating many places as they went. ‘Ngalyipi’ is a rope-like creeper that grows up the trunks and limbs of trees, including ‘kurrkara’ (desert oak). It is used as a ceremonial wrap and as a strap to carry ‘parraja’ (coolamons) and ‘ngami’ (water carriers). ‘Ngalyipi’ stems can be pounded between stones and tied around the forehead to cure headaches, and Warlpiri sometimes also chew the leaves to treat severe colds.

As the women went east, they passed through Kimayi (a stand of ‘kurrkara’ (desert oak)). They passed through sandhill country where the ‘yarla’ (bush potato or ‘big yam’ [Ipomea costata]) ancestors from Yumurrpa and the ‘ngarlajiyi’ (pencil yam or ‘small yam’ [Vigna lanceolata]) ancestors from Yumurrpa were engaged in a huge battle over women. This battle is also a very important Warlpiri Jukurrpa narrative. The women went on to Janyinki and stopped at Wakakurrku (Mala Bore), where they stuck their digging sticks in the ground. These digging sticks turned into mulga trees, which still grow at Wakakurrku today. The women then went on to Lungkardajarra (Rich Bore), where they looked back towards their country in the west and started to feel homesick for what they’d left behind.

The women split up at Lungkardajarra. Some of them travelled eastwards to Yarungkanyi (Mount Doreen), and kept going east. They passed through Coniston in Anmatyerre country, and then went on to Alcoota and Aileron and beyond. The other group of women travelled travelled northwards from Lungkardajarra to Karntakurlangu. These women stopped at Karntakurlangu (an area that literally means ‘belonging to women’) to dig for ‘wardapi’ (sand monitor/goanna [Varanus gouldii]) and ‘jintiparnta’ (desert truffle) before travelling further north. However, both groups of women eventually got so homesick for their desert oak country in the west that they went all the way back to Mina Mina, where they stayed for good.

The Mina Mina Jukurrpa (of which this ‘ngalyipi’ Jukurrpa is a part) contains important information about the different roles that men and women play in Warlpiri culture, particularly in the context of ritual performance. It alludes to an earlier time in which their ritual and social roles were reversed, in which women controlled the sacred objects and weapons that are now exclusively “owned” by men. 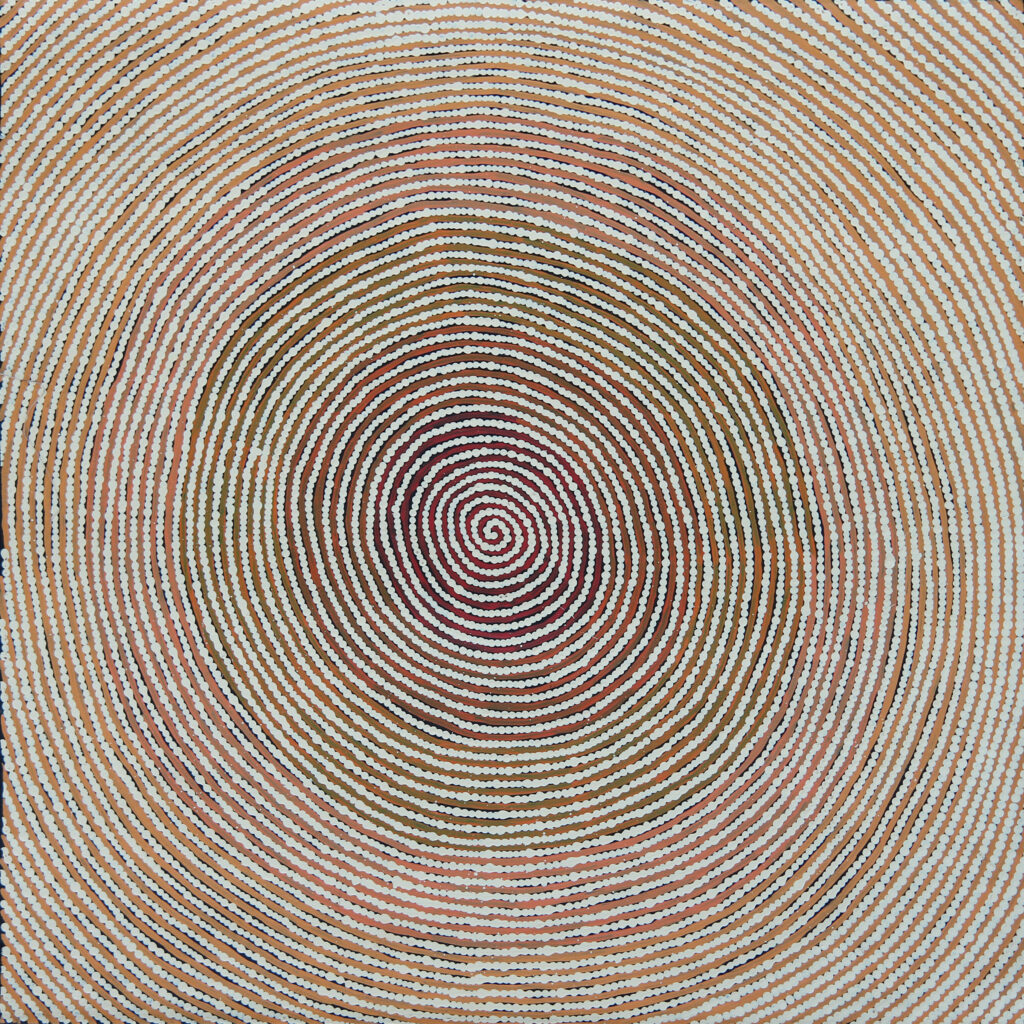