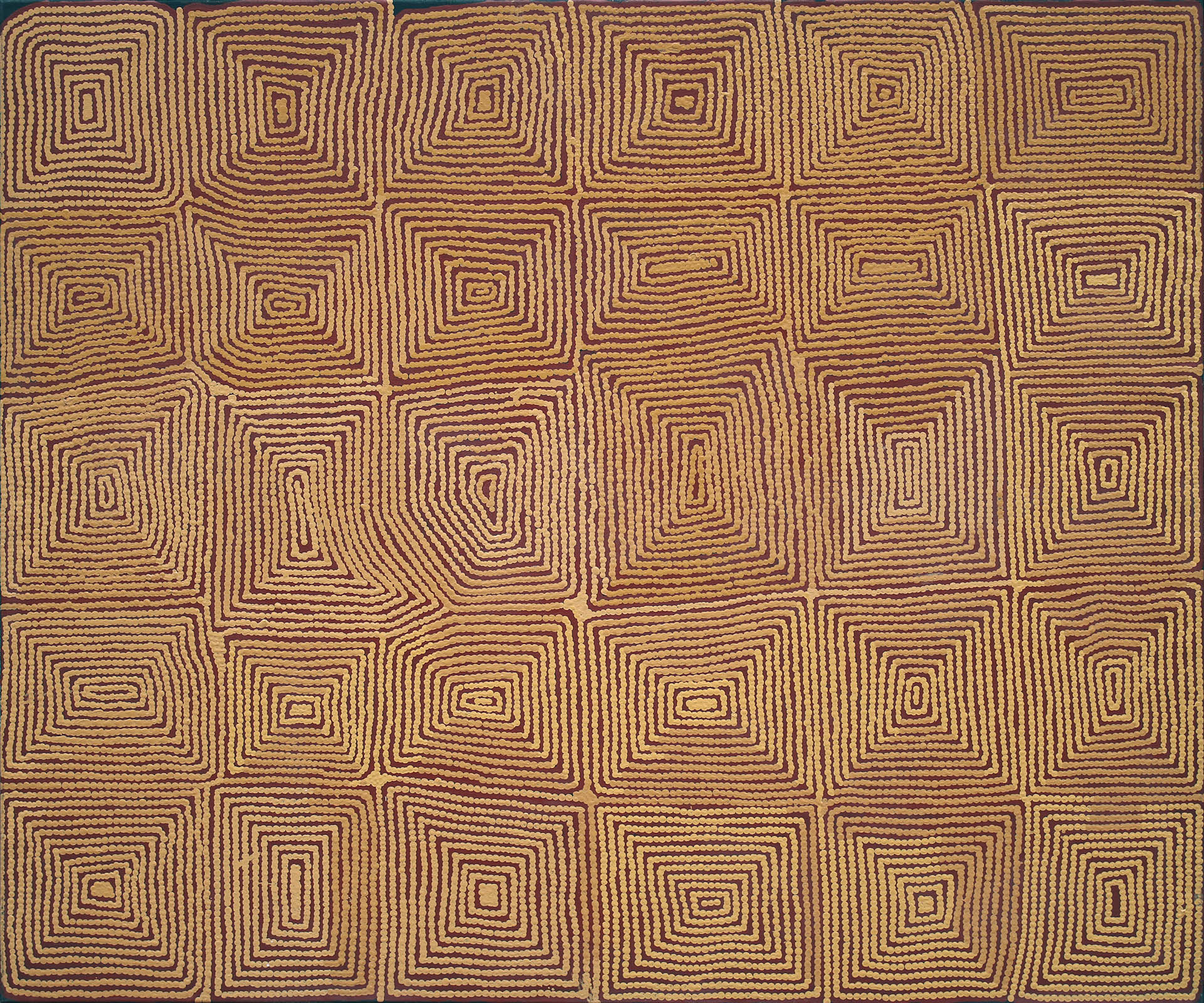 One of the last 9 nomads from 1984 who included Yalti Napanarti – Warliimpirrnga’s wife, and Yulkultji Ward Napanarti born 1971 whose husband is Charlie Ward Tjakamarra born 1928. The other nomad was Walala Tjapaltjarri. Warlimpirrnga’s paintings are associated with the swamp and water soakage site at Marawa just west of Lake Mackay where a large group of Tingari men in the dreamtime met before their travels in the Lake Mackay region.

Warlimpirrnga was the eldest amongst a small group of Pintupi people who walked into the newly established community of Kiwirrkura in 1984, having maintained an isolated and traditional existence at the insistence of their elders, in country west of Lake Mackay in the Great Sandy Desert. With the death of these crucial leaders, the nine, who were hailed in the media as a ‘lost tribe’ and had never encountered white people at close proximity, sought out relatives who had already ‘come in’. This was often the manner in which the more far-flung desert nomads slowly turned to the settled lifestyle, impelled also by drought and the encroaching European control of their traditional lands. When another brother Pierti, who had traveled with them, returned to the desert almost immediately, they were taken under the watchful guidance of Dr. George Tjapaltjarri, a ‘medicine man’ of high regard who could continue their instruction through the ‘law’.

After observing Dr. George and other artists at work for several years, Warlimpirrnga asked for painting materials and Daphne Williams, the co-ordinator of Papunya Tula Artists, was impressed with his efforts. Eleven of his paintings that were exhibited at Gallery Gabrielle Pizzi, Melbourne in 1988 were bought and donated to the National Gallery of Victoria by collectors Nellie and Ron Castan. Works such as these, collected early in his painting career were unpretentious and favoured a strongly traditional tone.

From the outset Warlimpirrnga painted stories related to the travels and sites created by the Tingari ancestors. Employing a classical geometric painting style as his starting point he slowly developed his imagery and adopted the op-art-like intensity of resounding shapes and lines that became favoured by a number of senior Papunya male artists during the late 1980’s and beyond. His meticulously applied designs and methodical background dotting resulted in works that exhibited a distinct rhythmic quality. This was reflected and strengthened in the fluidity of his line work while subtle variations in the under-painted colour imparted the feeling of the changing light as it lowers its angle and strikes the sand ridges and dunes in the desert. The zig zag designs and meandering lines echoed the parallel fluting incised on traditional shields, storyboards and ceremonial objects made by men in the Central and Western Desert. As Warlimpirrnga’s art practice progressed these lines became curved and closely repeated, imparting a sense of kinetic energy that suffused the whole canvas.

His primary subjects are the Snake and Kangaroo Dreamings of his country and initiation stories connected to the sites of Marawa and Kanapilya, close to his birthplace. For time immemorium men and boys would gather there for ceremonies, re-living the legends of their Tingari ancestors. Meandering lines sometimes re-trace painted body designs or signify the kunai snakes that also crossed the land with the ancestors and drank from the same sacred waterholes. Sometimes the men and boys would burn the spinifex grass country to catch kangaroos.

After painting for some time Warlimpirrnga began teaching his brothers Walala and Thomas Tjapaltjarri to paint and by 1996 Walala had taken to accompanying his brother on trips to Alice Springs. All three brothers as well as Dr. George Tjapaltjarri began painting for Gallery Gondwana during the late 1990’s.This was due in large part to the personal relationship they shared with Gallery Gondwana Manager Brice Ponsford, who had worked for Papunya Tula in Kiwirrkura when they first arrived in the community a decade earlier. By 1999 Dr. George painted less and less frequently as his eyesight began to fail, and Walala, preferring his independence, lived in Alice Springs and Katherine where he painted for a number of independent dealers. Warlimpirrnga however, tired of life too far from his family and homeland and returned to paint principally for the art centre other than on his infrequent travels during which he painted for others. Amongst the female members of the group that left the desert with him, Yukultji, Yalti and Takarria Napangati all became painters working with Papunya Tula.

In 2000, Warlimpirringa visited Sydney for the opening of the Papunya Tula: Genesis and Genius exhibition. During this visit he made a ground painting at the Art Gallery of NSW along with four other men from Kiwirrkura. Since that time, Warlimpirringa remained most at home in his community where he lives with his wife and children, except for occasional visits to Alice Springs or the southern cities when his art career demands it.