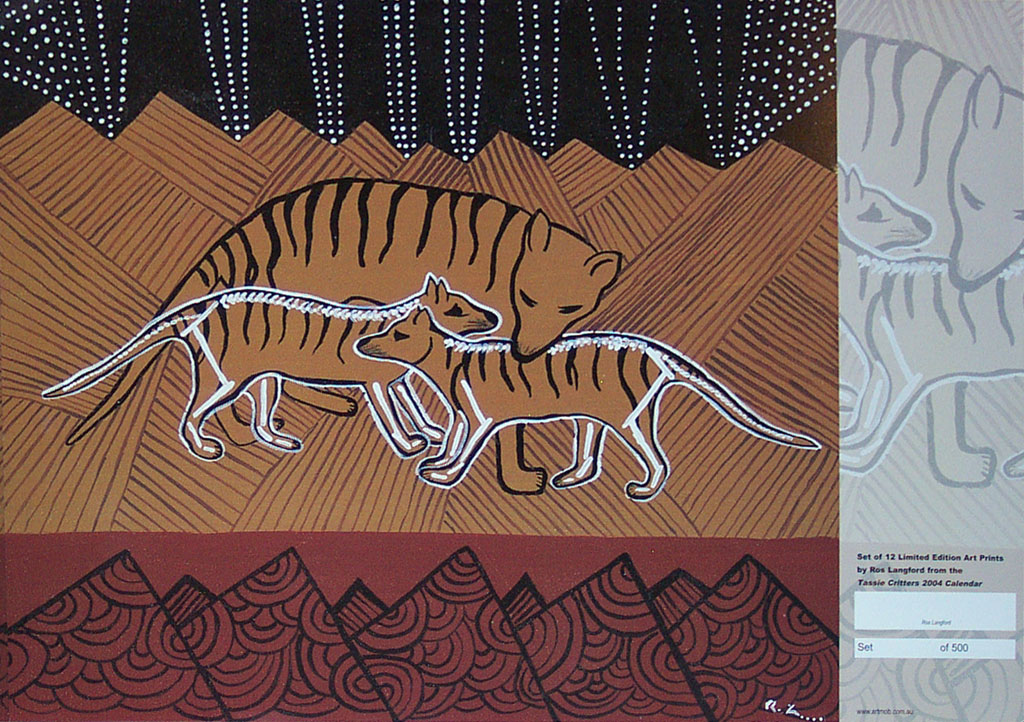 Rosalind has lived in Tasmania since the 1980’s. Her mother was a Yorta Yorta woman and her father a Wadjari and Tasmanian Aboriginal descendant. Ros’s mother was born on the Cummeragunja Mission near Echuca, Victoria. Her father taught her to paint in her early life and in the beginning of her painting career she followed her father’s style of figure movement.

In 1992, Ros produced a limited edition set of three prints entitled ‘The Returning’, ‘Tare Nore’s Journey’ and ‘The Homelands’. These limited edition prints are presently on display in over thirty schools throughout Tasmania, Victoria and Western Australia. They have also been purchased by collectors interstate, United States, England, Canada and New Zealand.

Ros has completed a Bachelor of Fine Arts in 2010 at the University of Tasmania, School of Art. She displayed her graduation exhibition at Art Mob, Aboriginal Fine Art Gallery in December 2010 which featured her paintings and prints. Rosalind is the first artist to use ochre as a print medium. Her signature piece from this exhibition was acquired by the Tasmanian Museum and Art Gallery.

“My artwork incorporates symbols and motifs in a contemporary style and medium. Many of my artworks are presently being used by schools in Tasmania as awareness programs on Aboriginal Culture in Tasmania. I have lectured on Aboriginal Culture and Aboriginal Political issues at The University of Tasmania, Adult Education Aboriginal Studies Unit, Rosny College and various primary schools throughout Tasmania. I have also conducted Aboriginal awareness seminars for the Antarctic Division (Tasmania) and the Department of Education and the Arts.” Rosalind Langford