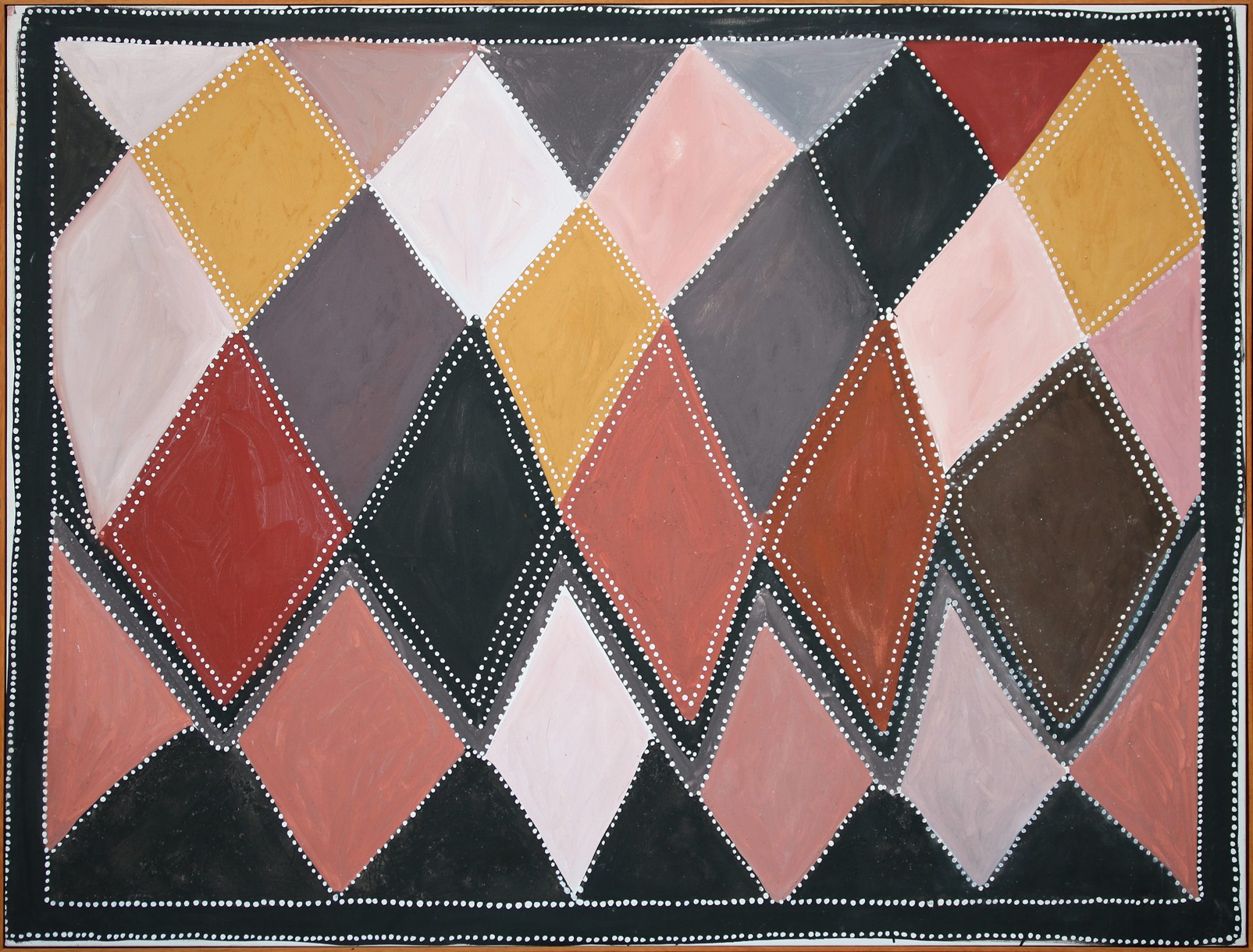 Queenie McKenzie, also known as Mingmarriya (limestone country) and Garagarag for her blonde hair, was born in about 1930 on Old Texas Station, on the western bank of the Ord River in the East Kimberley. Her mother Old Dinah was a Malngin/Gurindji woman and her father was a non-Aboriginal horse breaker but Queenie grew up among Gija people and spoke Gija as her first language.

Some of Queenie McKenzie’s early life was harrowing. When she was still a baby, her father wanted to take her away but her mother refused and kept her on Old Texas Station. Then floods came and submerged the old station causing them to move by wagon and dray to New Texas Downs Station, located just east of Turkey Creek. The police came several times and attempted to take her away but she stayed on the station, being rubbed with charcoal and strongly defended by her mother on separate occasions.

Queenie McKenzie was a stock camp cook for nearly forty years on New Texas Downs, building up an intimate knowledge of this locality before she moved to live with the Warmun community in the mid-1970s. She used to watch the Warmun artists painting and decided that she would also like to try. In the mid 1980s, she made and painted a coolamon, which was much admired and then began to make pictures of her country, mostly with coloured pencils and occasionally with ochre on canvas board. Some were made for use in the Mirrilingki Mission in Warmun and the Ngalangangpum bicultural school and others were made for the commercial market.

Most of her works from this period contain a horizon line, layers of hills, flora and fauna, or human figures: some depict Christian subjects from the Old or New Testament. The artist began to paint for Waringarri Aboriginal Arts, Kununurra in 1990, when her work was first exhibited and came to notice, being distinguished by her use of pink and purple ochres which she mined herself. Queenie McKenzie’s first solo exhibition Gara-Garag: My Life Longa Texas was presented in association with Waringarri Aboriginal Arts at William Mora Galleries in 1995.

Queenie McKenzie’s inimitable and forthright style translated to her paintings and to her dedication to preserve the strong law and culture of the area. A great teacher of language and culture, she was the driving force behind the reintroduction of women’s law meetings in the East Kimberley in the early 1980s. Devoted to inspiring younger artists to paint and to keep their culture strong, she was instrumental in establishing the first wholly owned art centre for Gija artists in the Warmun community. To ensure the continued development of future generations of Warmun artists, the Warmun Art Centre was founded in August 1998. Also that year, in recognition of her contribution to the reconciliation process, Queenie McKenzie was presented with the Western Australian State Living Treasures Award in Perth, and with the National Female Elders Award at the NAIDOC Week celebrations in Broome.