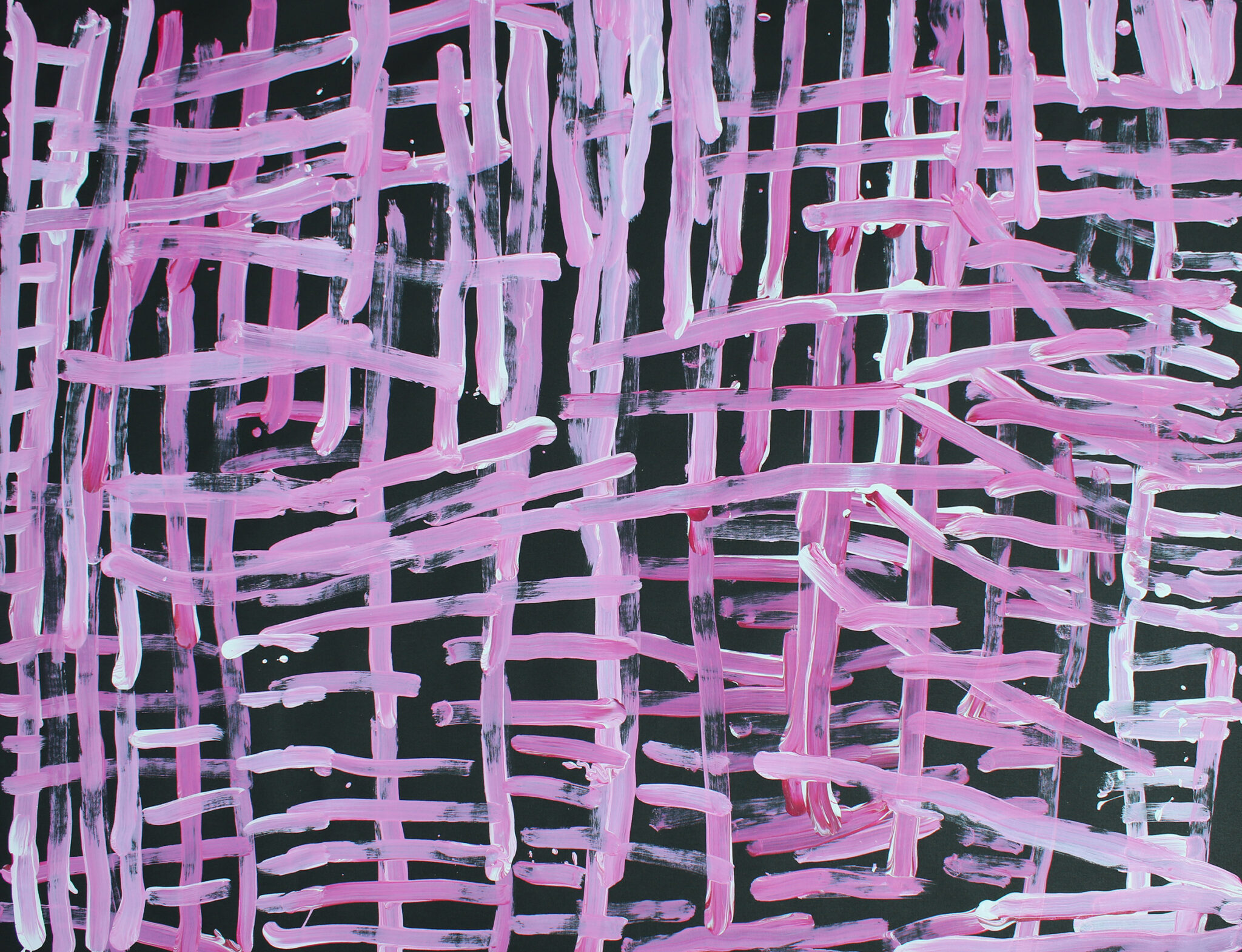 Polly Ngale has painted amazing glowing fields of colour for about 30 years defining her as one of the great colourists of our time.

She was born around 1940 in Utopia, Northern Territory, as an Anmatyerre tribal person. As a teenage girl, she learned the art of body painting during the traditional ceremonies in her country, Utopia.

Polly began her artistic career in 1977 with the production of batiks when she was instructed by Suzie Bryce, a craft instructor, and Yipati, a Pitjantjatjara artist from Ernabella. When Jenny Green arrived at Utopia and continued the women’s education in this new technique, Polly was an enthusiastic participant. She painted bush plum stories with an exuberant use of colour.

Often travelling with her younger sisters Kathleen and Angeline, Polly would wear her flowing silk creations, often as a head scarf. Working on the silk she gained great confidence in the use of colour, which gave her a great advantage when she had access to a wide range of rich colours when she started painting on linen on her homelands at Delmore.

Polly took part in the Summer project in 1988/89 at the S. H. Ervin Gallery in Sydney. Her silk batiks were later shown to a wider audience in 1990 when 88 works from the Holmes a Court collection toured Ireland, Scotland and Harvard University and the University of Minnesota, Minneapolis in the USA; Lake Oswego Festival of the Arts, Oregon, USA; The Forum, St Louis, Missouri USA; and the Art Gallery of New South Wales, Sydney.

Polly Ngale has painted exquisite glowing clouds of colour for about thirty years, adding layer upon layer of dots to create magnificent images. Her paintings often depict bright yellow seeds, a feast for emus, amongst the bush plums that grow in her country. Polly is inspired, as are her sisters, Kathleen and Angeline, by the conkerberry, or wild plum (anwekety or bush plum, as it is known to her). They traditionally are very much involved with every part of the life of this wonderful bush, which after summer rains produces a prolific crop of delicious purple berries that are sweet to the taste and highly nutritious, and greatly favoured by desert Aboriginal people.

Her artwork – bush plum dreaming:
These sweet, rich dark purple berries only grow on the plant (Carissa lanceolata) for a couple of weeks throughout the year, but Polly’s people collect plenty of them and store them dry, immersing them in water again before being eaten. The plant of the conkerberry is a tangled, spiny shrub that can grow up to two metres high. This plant also bears medicinal properties. The orange inner bark from the roots can be soaked in water and the product of that process, is a solution that can be used as a type of medicinal wash. This is particularly favoured for skin and eye conditions. The thorns on the shrub also have curative properties. The green bush produces fragrant white flowers, then the tiny green berries ripen and grow, changing colour over weeks from light green to pink and browns to yellow, to shades of red and purple when they finally ripen. The fruit looks very similar to a plum and is often referred to in English by Polly as a ‘bush plum’. During the Dreamtime, winds came from all directions, carrying the anwekety seed over Polly’s ancestors’ land. The anwekety of the Dreamings then propagated, bore fruit and dropped more seeds. Many winds blew the seeds all over the Dreaming lands. Ceremonies are held in honour of anwekety in which bodies are anointed with emu oil, then ochre paint; singing and dancing follow, ensuring that the sweet wild plum fruit will continue to feed the Anmatyerre people at Utopia.