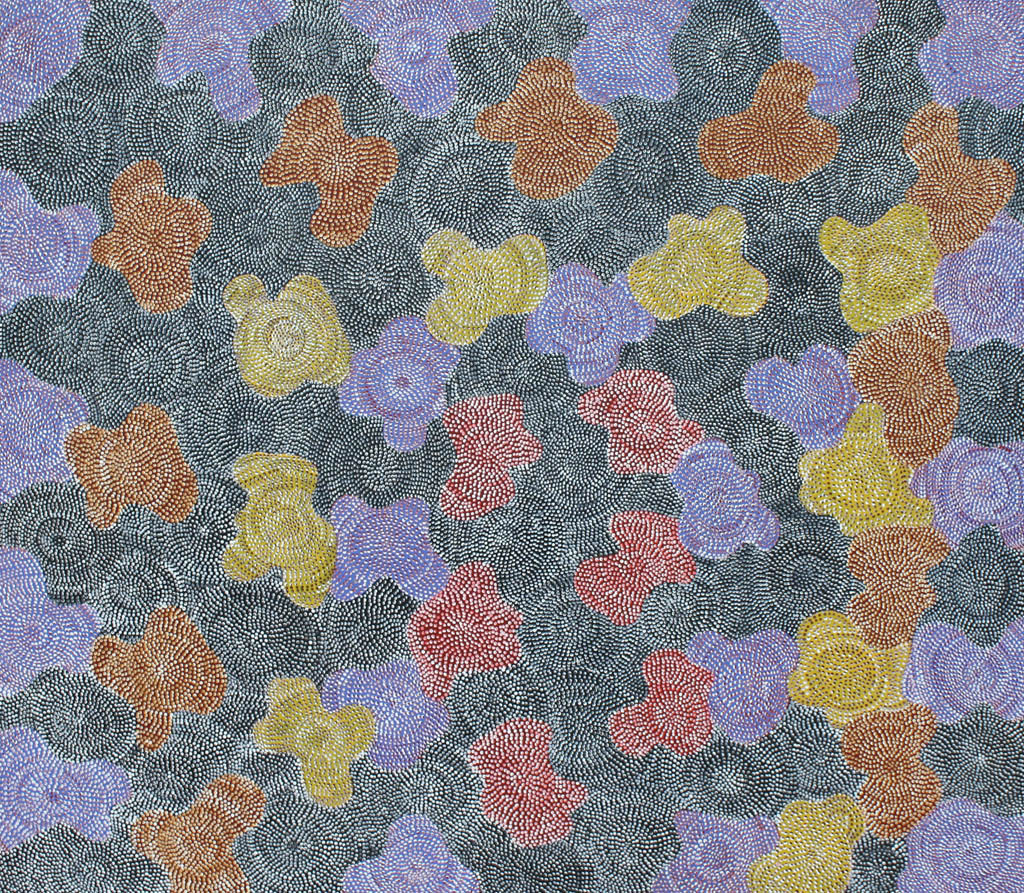 Pansy was born in the bush at Haasts Bluff near the end of World War 2 where she lived until a young teenager. Her Warlpiri father and grandfather were both born at Pikilyi (Vaughan Springs), while her Luritja mother was born at Illpilli.
Pansy never attended school, instead learned bush skills and excelled in riding donkeys, ponies and at one stage Pansy even looked after her own camel (Lofty). Haasts Bluff at that time was a Government Cattle Station to teach recently arrived Luritja men to be stockmen.
In 1959 Pansy’s people (her family) moved by camel to the new settlement at Papunya. She learnt English by ‘listening now and again’ while working as a house cleaner and doing home duties for people like Jeremy Long. He was a patrol officer bringing in Pintupi nomads from the western desert.
In about 1978 Pansy visited her Grandfather’s (Arrapi) country at the Ehrenberg Ranges, a site known as Illpilli, it has good spring water where Tea Trees abound. Pansy went with two brothers Bent Nganna & Old Mick Wulungarri who showed a large number of people including Pansy all the sites of the country.
From Wiyinpirri at eastern edge of Ehrenberg Ranges to Illpilli and Kumparumba in the north the old men revealed all the hidden springs and water places and the relating dreaming stories. Shortly after Illpilli became an outstation with a windmill, however, Kintore followed as the major homeland centre in 1982.
“When I was a young girl we always travelled around a lot. We’d go to a swimming hole, hunting or gathering bush tucker. Later on I saw my uncle painting and I asked him, ‘Can you tell me my mother’s dreaming? I want to put them down.’ ”
They told her the stories and showed her in the sand how to depict them. She practised on paper and later used her designs to do collages made up with the ininti seeds from which the women used for making jewellery. As she gained experience in this form, she moved into her forte’, acrylic on canvas.
Since that time Pansy’s paintings have inspired world acclaim. Today she is considered one of the foremost artists from Alice Springs.
Although it has been said that Aboriginal women have only been painting since the 1980’s, Pansy states that she, like her sister Eunice Napangardi, commenced painting earlier. She began recording her dreamings in the early 1970’s at the start of the Papunya Art Movement. By observing Johnny Warangkula, Kaapa Mbitjana Tjampitjinpa and Old Mick Tjakamarra, three established artists, Pansy’s style emerged. Unlike many other women artists now associated with the Papunya Tula Artists she did not serve an apprenticeship, but began painting for herself. At the time the resources were the province of the senior initiated men that started the movement. She sold her work privately through Alice Springs until 1983 when she started painting with the Papunya Tula Artists on a full time basis for a while. Pansy moved from Papunya on to Alice Springs in 1989.
Pansy’s work gives voice to her traditional beliefs and symbolises a triumphal cultural statement by the once near defeated people of the Central Australian Desert.
Her paintings are remarkable with their use of colour. Blues, greens and pinks create a spiritual vigour and nervous energy that excite the eye. They are refreshing with their striking vitality and exploring diversity. Her paintings represent the fertility and glory of her traditional land, making a statement about the relationship of her people and the land.
Pansy is an artist who constantly experiments and surprises. Her close contact with non-Aboriginal Australians has progressed her in her search for new rhythms and frontiers yet she always remains firm within the confines of Aboriginal traditions.
Her work was seen at the 1988 Brisbane expo as well as the cover of ‘The Inspired Dream’, which was published at the same time. She has had several solo exhibitions, one of them at the Sydney Opera House, followed by the Gallery Gabrielle Pizzi. Her work is featured in many group exhibitions including Richard Kelton Foundation collection, ‘Mythscapes’ at the National Gallery Canberra and the ‘Karnta’ exhibition at the New South Wales Art Gallery.
In 1989 she won the 6th National Aboriginal Art Award and in 1993 won the Northern Territory Art Award.
Pansy’s key dreaming is the Hailstone Dreaming. This tells the story of how a long time ago the little willy wagtail told the elders at Illpilli (about 400km west of Alice Springs near the WA border) that if they look west they will see a small cloud. The willy wagtail told them that this cloud would grow into a big storm cloud and that they should build a windbreak to protect their community. This they did but when the storm broke it belted down very large hailstones that went down deep into the ground. The storm killed many people. There is now a spring at Illpilli that bubbles up in a small waterhole. The water is “cold, cold water” from those hailstones.