Minnie Pwerle was born in the Utopia region about 1922. Her country is Atnwengerrp and her language is Anmatyerre and Alyawarr. She passed away on March 18, 2006.

Her artwork shows body paint designs entitled Awelye in her language and the location is Atnwengerrp, an outstation in the Utopia region. These designs are associated with imagery for ceremony relating to Bush Melon and Bush Melon Seed. Minnie Pwerle’s affection for painting is shown through the use of, at times, brilliant colours – vibrant reds, electric blues and shocking pinks, but sometimes subtle tones that are quite haunting.

There is no doubt that her confident artwork, painted prolifically between late 1999 and 2006, was the catalyst for the inclusion of Australian Aboriginal art in the contemporary home design. 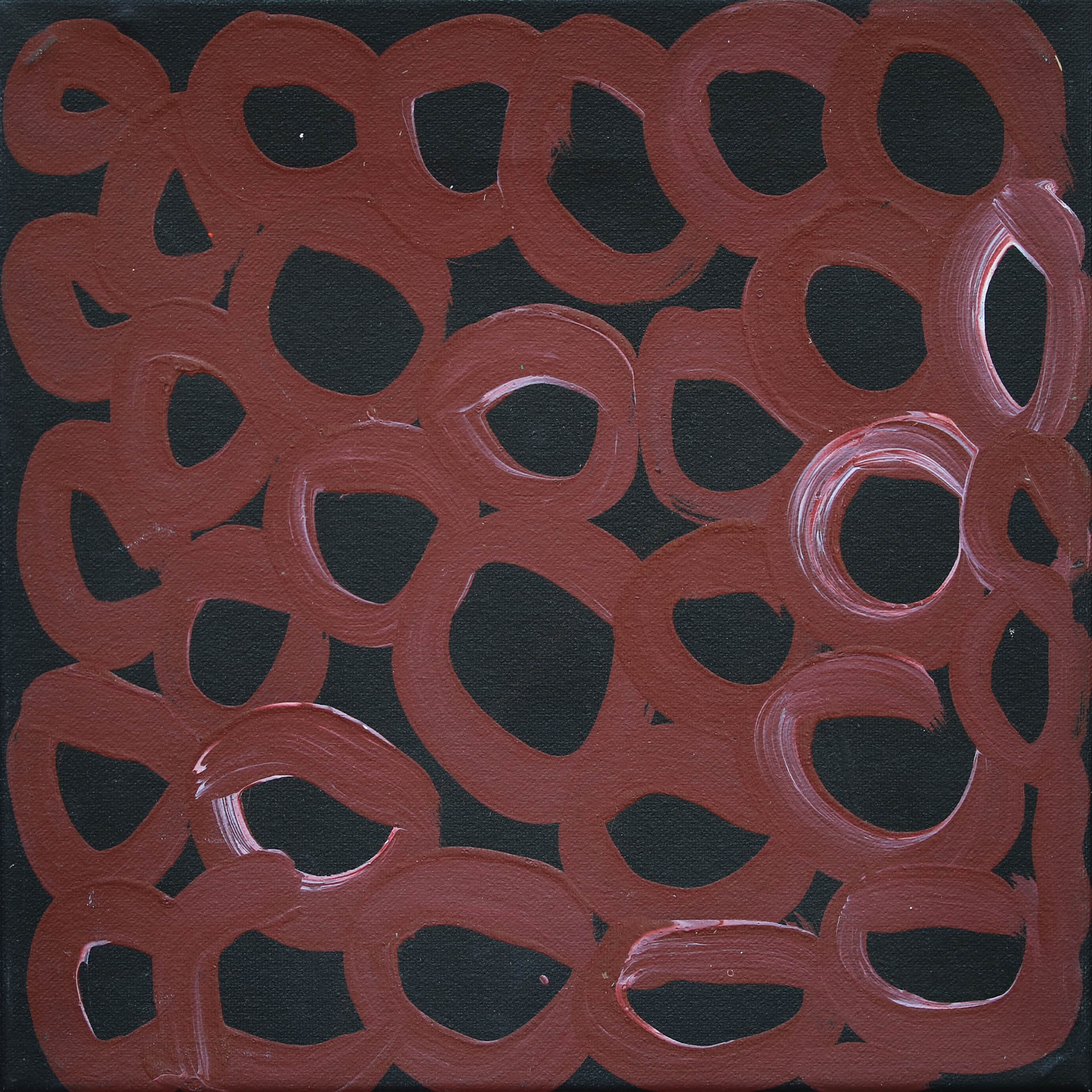 Minnie Pwerle was born in the Utopia region in approximately 1922. Her country is Atnwengerrp and her language is Anmatyerre and Alyawarr. She passed away on March 18, 2006.

Minnie had five sisters, Margie, Molly, Emily, Lois, and Ally and one brother called Louis (her other brother is now deceased).

Minnie was maried to Emily Kame Kngwarreye’s brother who is now deceased and together they had seven children including Eileen, Betty, June, Dora, Raymond, and Barbara Weir who is a well-known Aboriginal artist. Minnie had not painted a great deal until late in 1999 when she painted a series of linear works at DACOU. Expressing a desire to paint, canvas upon canvas was presented to her and attacked with vigour reminiscent of the late Emily Kame Kngwarreye. The finished pieces were bright, vibrant, free flowing and very interesting and captured the attention of prominent gallery owners who purchased every canvas painted. This informal and completely unexpected workshop heralded Minnie’s entrance into mainstream Aboriginal art.

Minnie’s main dreamings are “Awelye-Atnwengerrp”, “Bush Melon” and “Bush Melon Seed”. These convey her love and respect for the land and the food it provides to the people. These bold, brave, assured paintings depict traditional body designs and bush melons which are part of Pwerles intimate and intuitive knowledge of the life around her. Her love and delight in painting is translated in the use of brilliant colours – vibrant reds, electric blues and shocking pinks mix to create superbly confident contemporary tableaux that have been compared to Tony Tuckson for their free-flowing linear quality, or to the Fauves for their love of and experimentation with colour.

“Awelye-Atnwengerrp” is depicted by a series of lines painted in different widths and colours. This pattern represents the lines painted on the top half of the women’s bodies during ceremonies in their country of Atnwengerrp.

“Bush Melon” is depicted using a linear design of curves, circles, and breast designs in different colours creating a very loose and bold design, while “Bush Melon Seed” is big and small patches of colour strewn across the canvas. Both these Dreamings tell the story of this lovely sweet food that comes from a very small bush and is only found in Atnwengerrp. Once very abundant and fruiting in the summer season, the bush melon is now very hard to find. Minnie and the other women used to collect this fruit (which was green in colour and ripened to a brown colour) and scrape out the small black seeds. They would then eat the fruit immediately or cut it into small pieces which were skewered and dried ready to be eaten in the coming months when bush tucker was scarce.

Minnie lived in Utopia at the Arlparra store with some of her children. She used to occasionally visit Adelaide to see her grandson, Fred Torres.