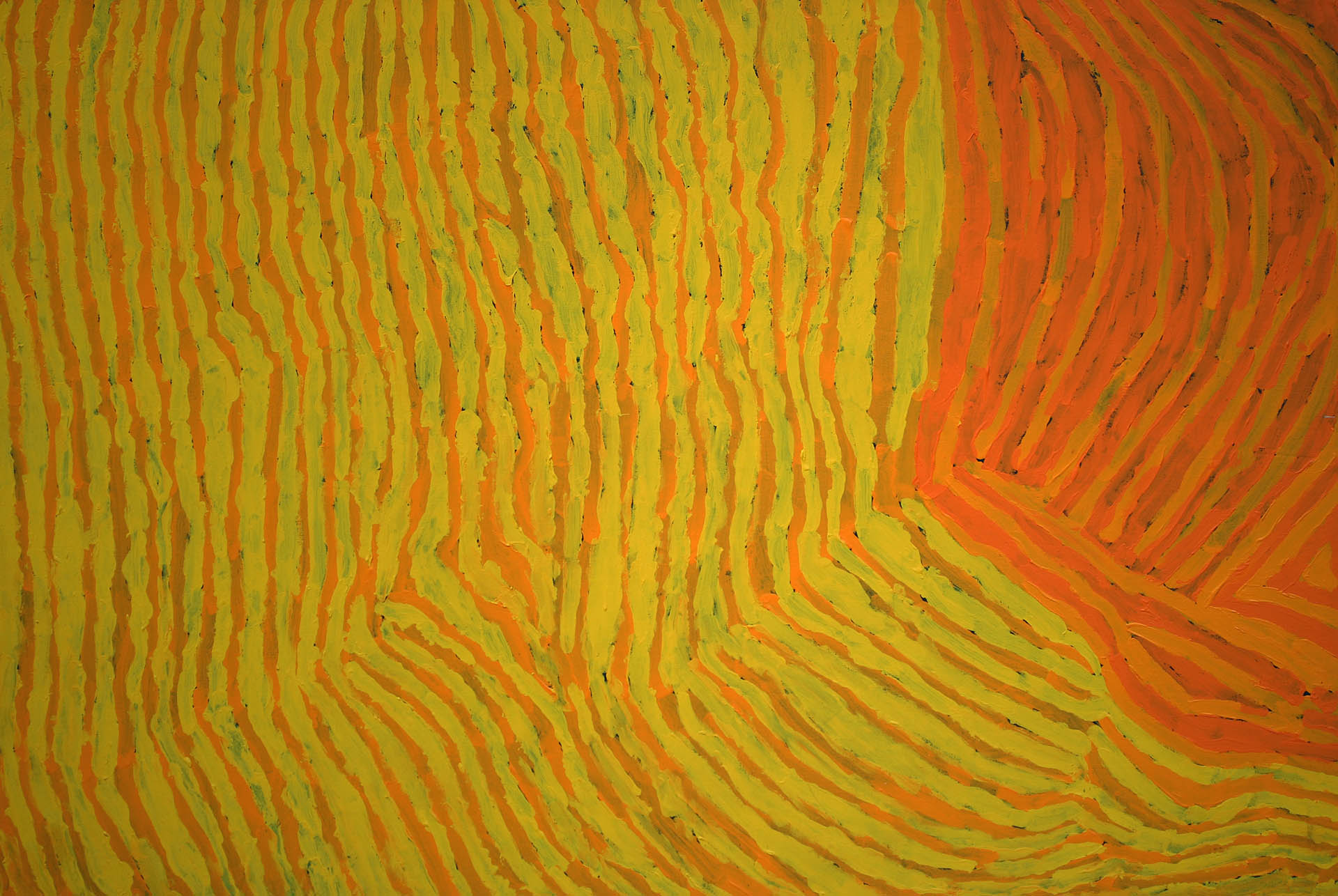 Makinti Napanangka was born in 1930 in the area of Karrkurritinytja (Lake MacDonald) region of Central Australia. She moved to Haasts Bluff with her husband, where she lived until Papunya was established in 1960. Makinti began painting in 1993, when she participated in the Kintore/Haasts Bluff collaborative canvas project, ‘Minyma Tjukurrpa’ under the guidance of Marina Strocchi, the art coordinator at Haasts Bluff. The interest in Pintupi women’s art arose in the mid-1990s, quite late in the history of the contemporary Aboriginal art movement. It was in 1996 that Makinti Napanangka, along with her cousin and painting companion, Tatali Nangala, began painting for Papunya Tula Artists.

Makinti Napanangka’s paintings often consist of interwoven, lightly coloured lines, which represent the hairstring skirts of the ‘Kungka Kutjarra’ or Two Women, who feature prominently in Pintupi ancestral stories. These hairstring skirts are worn by Pintupi women in their ceremonies when they reaffirm these mythological stories through dance and song. While most of Makinti’s imagery is related to the Kungka Kutjarra, it can also refer to the Kuningka – the western quoll – which is represented by circles.

Makinti Napanangka was selected for inclusion in the retrospective exhibition Papunya Tula: Genesis and Genius, held at Sydney’s Art Gallery of New South Wales in 2000. Since then she has had four solo exhibitions, and in 2003 she was a finalist in the esteemed Clemenger Art Award held at the National Gallery of Victoria, Melbourne. In the January 2003 issue of Australia Art Collector, Makinti was named among the top 50 of Australia’s Most Collectable Artists. Judith Ryan wrote of her entry for the Clemenger Art Award “Makinti’s work for the Clemenger Contemporary Art Award, Women’s Dreaming at Lupulnga, stands out for its spontaneous, gestural qualities and its bursts of hot pink, bluish-mauve and yellow within masses of swirling lines whose rhythm changes and alternates within the structure of the composition. The impact of her work is haptic, concerned with touching and sensing with fingers, rather than purely visual. The repetition of colour chords and textured striations, which closely echo each other, has a rhapsodic effect akin to many bodies in dance and reveals the inner or spiritual power, the essence, of Makinti’s country and cultural identity. The energetic lines invoke body paint for women’s business, and more particularly represent spun hair-string, which is used to make belts worn by women during ceremonies associated with the rockhole site of Lupulnga, a Peewee Dreaming place. Makinti distills body-painting designs to their quintessential forms, abundant and looping in rhythm and seeming to stretch beyond the frame”. Makinti passed away on January 11 2011.