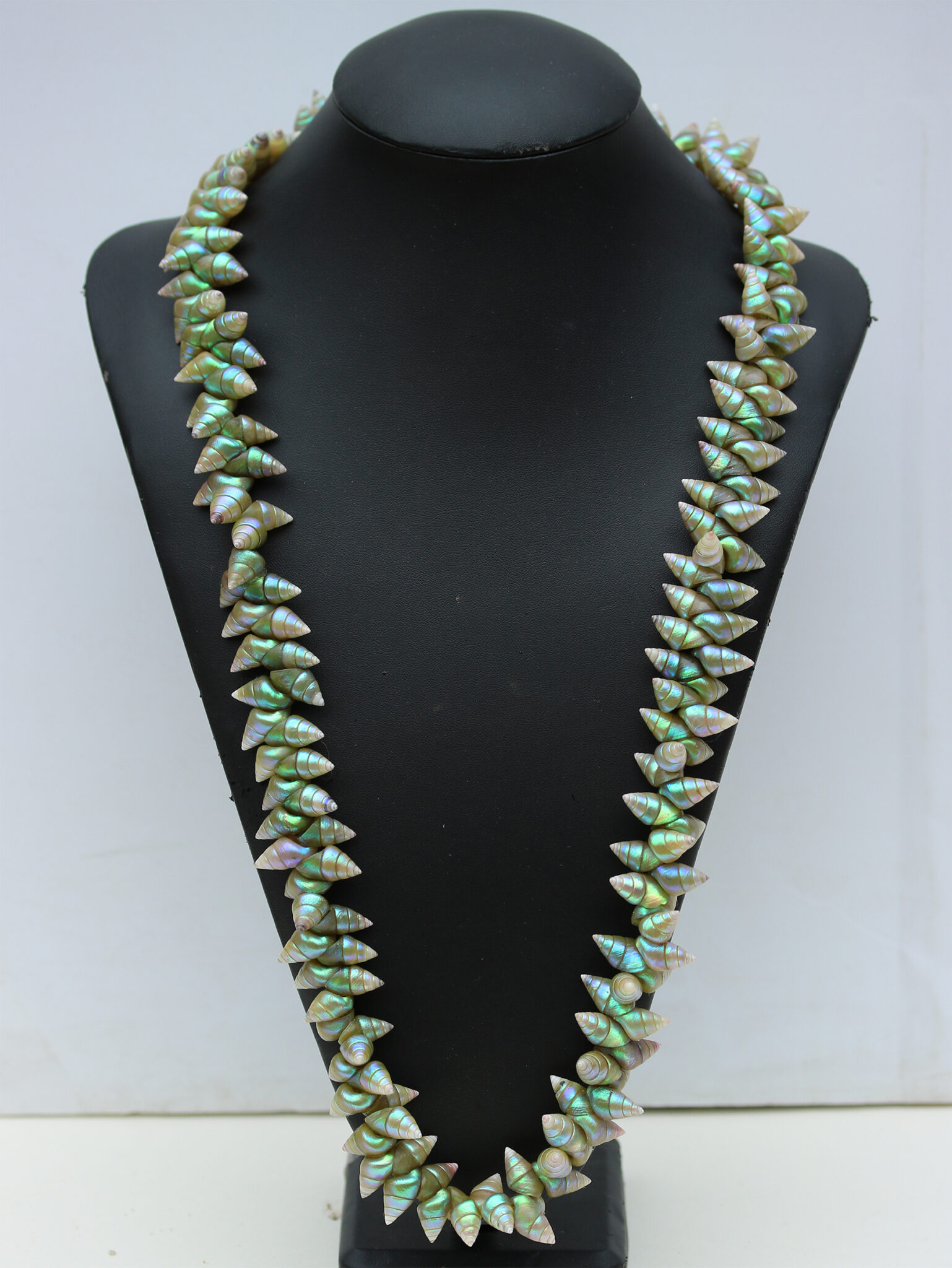 Lola Greeno was born in 1946 on Cape Barren Island and later moved to Flinders Island then in 1972 she moved to Launceston.

Lola is a highly respected Tasmanian Aboriginal shell worker who has been exhibited widely throughout Australia and is represented in state, national and private collections.

Lola’s art work includes completing a commissioned long green maireener shell necklace for National Gallery of Victoria. With over 16 years of experience, Lola has experimented with many new ways of cleaning, polishing and finishing shell necklaces. Lola first started her designs with larger shells and set out to take a different approach to shell necklace making. Each of Lola’s pieces is unique and she skilfully matches the available shells to set the pattern used in the necklace. Small differences in the shells create new patterns, which can give outstanding results for collectors.

Lola regularly drives the short distance to the beaches where she collects, washes and dries the many thousands of shells that she uses to create her exquisite shell necklaces. Some of the rarer shells, such as the Marieener, Rice and Toothy shells, can only be collected from Flinders Island where she lived for many years.

Lola Greeno Story:
I watched my mother making shell necklaces. She made them apparently before they were too many of us children. There were ten in my family. She made them in earlier times for pocket money helping to feed and clothe us kids. But then she gave it away for a few years, then she moved to Launceston. And I thought, “If there’s one thing I can achieve in my life, it’s that I’d like to see her go back and make the necklaces again while she’s still alive.” But she wouldn’t fly back to the island. So I brought the shells back to her and we sat around the table and discussed what kind of pattern we wanted to make and with what kinds of shells.

I made a black and white one recently because three years ago my mum picked out some black and white shells and that was going to be the last necklace she made. And so every time I think about these shells I have to make a black and white necklace in respect and honour to her because I know that it was one of her favourite ways of putting the shells together.

The shells are usually collected off the live seaweed floating in the sea. That could take you an hour or two hours to get a cupful, they’re getting so scarce now. You need the low tides otherwise you have to wade through too much water.

After the drying process you have a day of piercing them. Shells like the mareener have to be pierced with a hole. And it has to be a fairly solid tool. Some were using an old dart from the dartboards. I’ve got an old screw that’s been filed down with a door handle on it. I’ve actually got about three different sizes. Then you have to have a day when you sort your shells, or a few days maybe to sort them into sizes, because you try not to put really big shells with little shells.

Some of these little shells are so tiny, like the little rice shells, they fit under your fingernail, but you probably wouldn’t need a heavy tool to make a hole in that, you’d probably use a needle and thread them at the same time. Your fingers become really sore after a while.

When I was doing one long one with lots of rice shells, I found that I could probably do 10 or 20 centimetres a day until my fingers were too sore.

It’s so important this be told. My mother didn’t get to write much about herself, they wouldn’t have considered themselves good writers, although she could always write whatever she needed to get by. Too many of the stories are lost and gone with our people.

The shell necklaces are the most significant thing to the Tasmanian Aboriginal history because they are the continuing craft of our community that’s never been lost, at least not by the Island women anyway. I’m just so proud of where all my necklaces are, virtually all around Australia. And I now tell my grandkids, you know you can go to the Powerhouse in Sydney and see one of your grandmother’s necklaces and their great grandmother’s necklaces in the National Galley in Canberra so you know it’s pretty special. Their history is stored in those places.