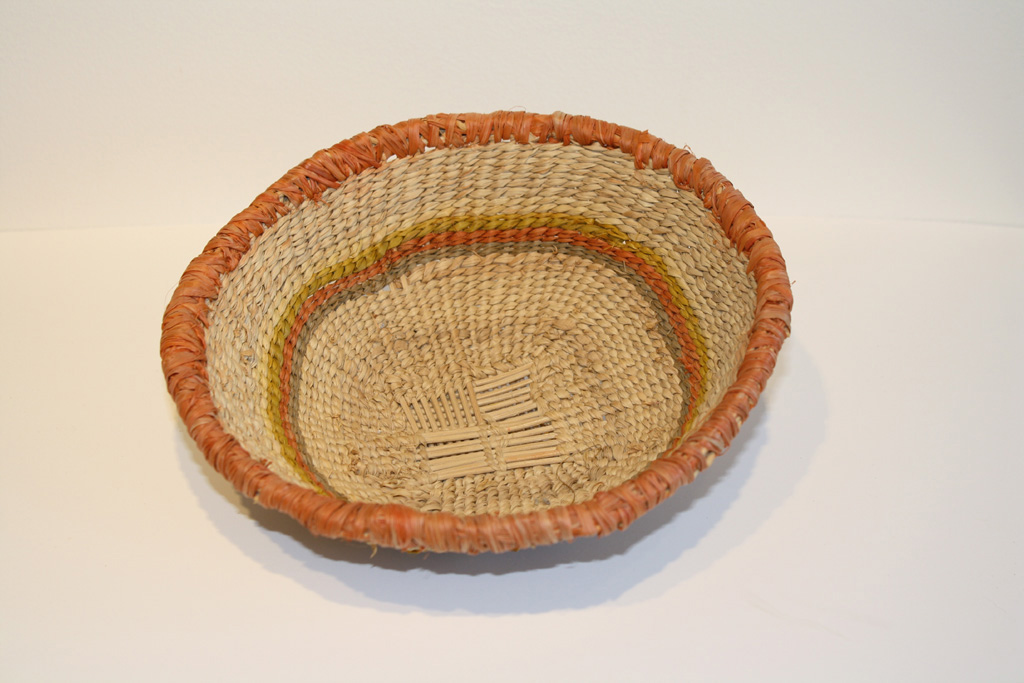 Lennah Newson (1940–2005) was born in Launceston as the daughter of the late Aunty Ida West, spent her childhood on Flinders Island and later lived in Hobart. Throughout the years Lennah remained deeply attached to Flinders, in particular, the beaches and the sea. They were her source of inspiration.

Lennah made her baskets using materials including river reed, watsonia grasses, juncus reed, native flax, feathers, as well as flotsam found on beaches. She would weave these materials into coiled, twined and cross-stitched baskets sometimes densely woven and robust, at other times delicate and transparent.

Edited from a biography by Laura Fisher for the Dictionary of Australian Artists Online, 2008. Reproduced with permission of Wayne Newson, and the author and publisher.

‘The reeds are gathered seasonally from creek waterways and rivers and dried. The weaving I do is twining. These baskets are made mostly by older women, young women as a rule are not interested in this time consuming craft. I have over the last twenty years or more began practising these traditional skills purely for my own creative pleasure and for the purpose of maintaining my culture.’

Lennah Newson, Palawa basketweaver, was born in Launceston, Tasmania in 1940. Newson spent her childhood in Killiecrankie on Flinders Island, which is in the Furneaux Group of Islands off the north-east tip of Tasmania. Though she spent periods of her life in other parts of Tasmania, Newson remained deeply attached to Flinders Island for her whole life. In particular, the coastline of the island was a touchstone of meaning and inspiration for the artist, as the beach and the sea were important sites of economic and creative activity for her family. As was the case for all Aboriginal people who lived on the Furneaux Islands, fish were an important food source for the artist’s family and Newson’s observation of her father and grandparents making fishnets and fishtraps introduced her to weaving practices in her earliest years. Newson’s family’s resourcefulness nurtured her creative capabilities in other ways, as the following quote from the catalogue for the 2001 Adelaide Biennale “Beyond the Pale” (curated by Brenda Croft) conveys:

“While growing up on the island my family didn’t have much money to buy toys, so we made our own with materials gathered from the beach and the bush. Living on such an isolated island taught me to use my hands and gather the materials that were growing and living around us to make the things that would otherwise be impossible for us to have” (p. 29).

Newson’s sense of belonging to Flinders Island was also underpinned by the campaigns of her mother, Auntie Ida West, a respected Palawa elder who was born on Cape Barren Island in 1919. Auntie Ida fought for many years for the Wybalenna settlement on Flinders Island, the site of over 100 unmarked Aboriginal graves, to be returned to Aboriginal people. The graves are those of mainland Aboriginal Tasmanians who were removed to Wybalenna between 1832 and 1836 by George Augustus Robinson, and title to the site was finally handed back to the Tasmanian Aboriginal community in 2005. Lennah Newson supported her mother through these campaigns, and was a respected Palawa elder herself: in 2006 she was inducted into the Tasmanian Honour Roll of Women for service to Aboriginal Affairs and the Arts. The Honour Roll recognised that “The continuation of traditional fibre art in the Tasmanian Aboriginal community will be the lasting legacy of Lennah Newson”.

Newson created baskets from a variety of materials. These included watsonia grasses, juncus reed, native flax collected from Oyster Cove on mainland Tasmania, river reed which “are gathered seasonally from creek waterways and rivers and dried” (artist’s statement, “Tactility” website), feathers, as well as refuse found on the beach such as commercial fabrics, mohair wool and plastic. The artist would weave these materials into baskets using various combinations of coiling, twining and cross-stitch. As a result, Newson’s baskets are sometimes densely woven and robust, and at other times delicate and transparent.

Lennah Newson passed away in 2005. From www.daao.org.au web site.