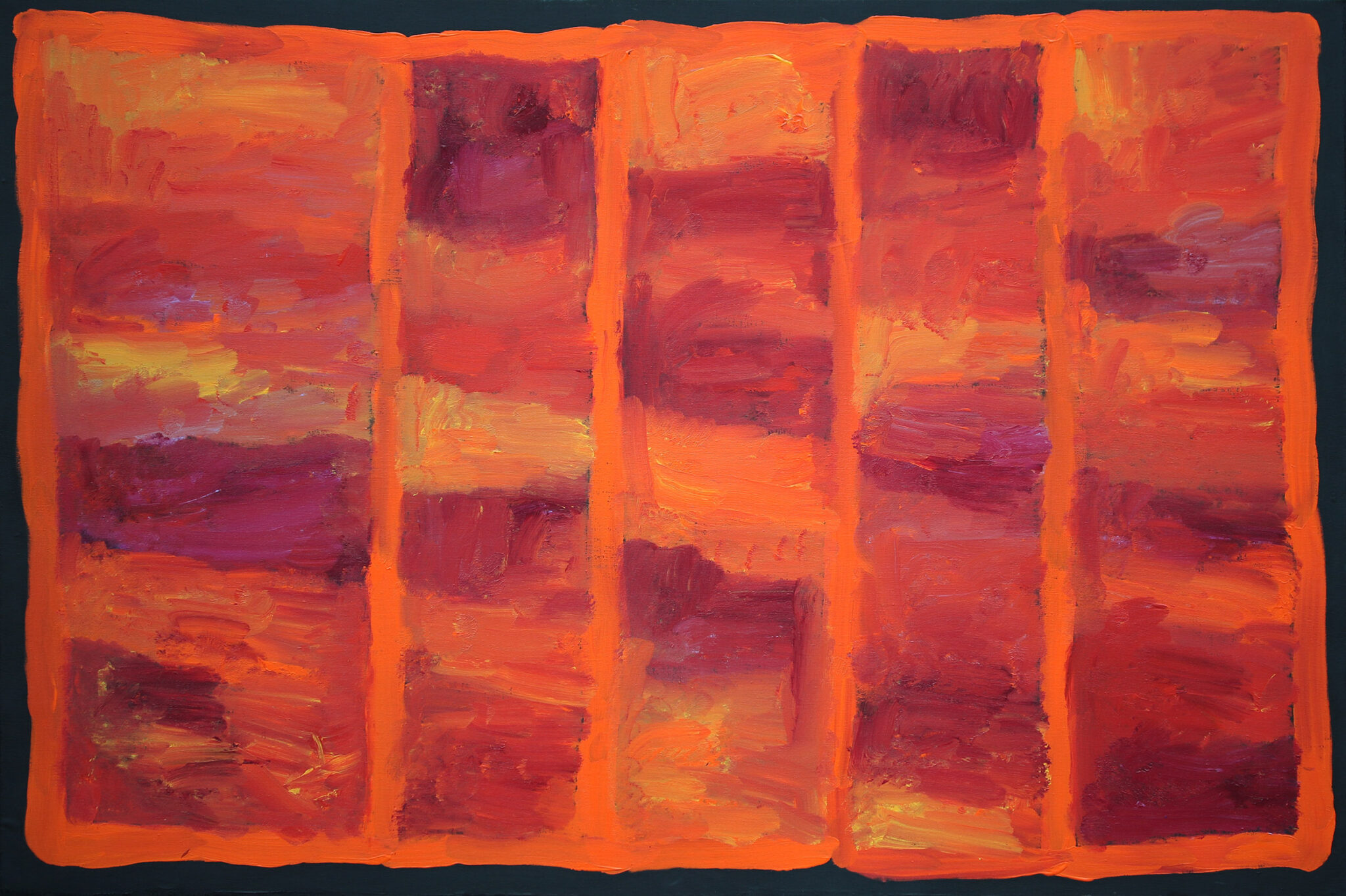 Kudditji (pronounced Kubbtji), was born around 1928 and is one of Australia’s leading Aboriginal artists. He is the half-brother of the late Emily Kame Kngwarreye – who is recognised as Australia’s most famous female Aboriginal artist. He had a traditional bush upbringing and like many Anmatyerre men of this generation, made a valuable contribution to the stockman’s profession and was also a mine worker for many years.

He is a custodian of many important dreamings, of the land and Men’s Business ceremonial sites located in his country at Utopia Station, about 230 km north east of Alice Springs. When Kudditji was younger he would take the young boys/men out hunting emus on his lands, performing traditional practices as part of their initiation as men. He depicts this knowledge and events in his ‘Emu Dreamings’ and his ‘My Country’ works. His paintings have been shown in many international exhibitions and he is known for his depictions of his Dreamings, particularly those related to the law of the Emu ancestors.

Kudditji has been actively painting since 1986. He was encouraged to paint in the ‘expected’ dot painting style of the time. He executed works with a detailed dotting infill. His use of ‘traditional’ colours combined with simple shapes told the stories of one of his inherited ancestral totems – the Emu Ancestors, their travels and teachings depicting various interpretations of the Emu dreaming sites and ceremonies associated with Men’s business. These distinctive articulate symmetrical dotted paintings (some with considerable ‘’wonk’’ factor) were sought after over the last 20 years in the major art galleries in Alice Springs and throughout the eastern galleries.

From early 2003 Kudditji began to experiment with paint to eradicate the pointillist style altogether and use a heavily loaded paint brush to sweep broadly across the canvas in stages, similar to the western landscape plane. He made use of exciting bold colour, abstract imagery, and an instinctive play with space and form. These paintings were romantic images of his country, accentuating the colour and form of the landscape including the depth of the sky in the raining season and in the summer heat. Whilst the early body of this work was admired by an astute few it was not well received at the time by the main outlets for his work.

Kudditji’s Dreamings have greatly evolved into extraordinary juxtaposed colour fields. Harsh or soft and often surprising to the Western eye, his painterly style maps out the creation, his country, and his traditional Dreamings. Kudditji is a respected and integral part of his land and culture and as an artist he is internationally acclaimed and his works are highly collectable and strikingly unique.

Now (2014) at the age of about 86, his passion has not waned for creating and showing the world his love of country. Being an traditional custodian and elder, Kudditji has an inherent ability to brilliantly interpret the changing colours of his ancestral desert homelands of the Utopia region, throughout the diverse and often, harsh climatical conditions. His uncanny ability, to portray to the viewer, his homelands, with either dramatic, bold and enthusiastic tones, or quiet, subtle and restrained blended shades, is a mark of the man’s spiritual connection and deep love of his country, in all its changing moods and seasons that play a big part in Kudditji’s choice of colours. While his spatial, painterly compositions have a Rothko-esque quality to them, the work of this Anmatyerre elder from the Northern Territory is clearly a unique Australian voice. His highly intuitive and gestural method of painting together with his vibrant, colour saturated spaces is ground-breaking in Aboriginal art, and although he is already well collected it is felt by many industry insiders that his work is poised for a major market leap. In 2006 Kudditji was named as one of the top 50 most collectible artists in Australia by Art Collector magazine