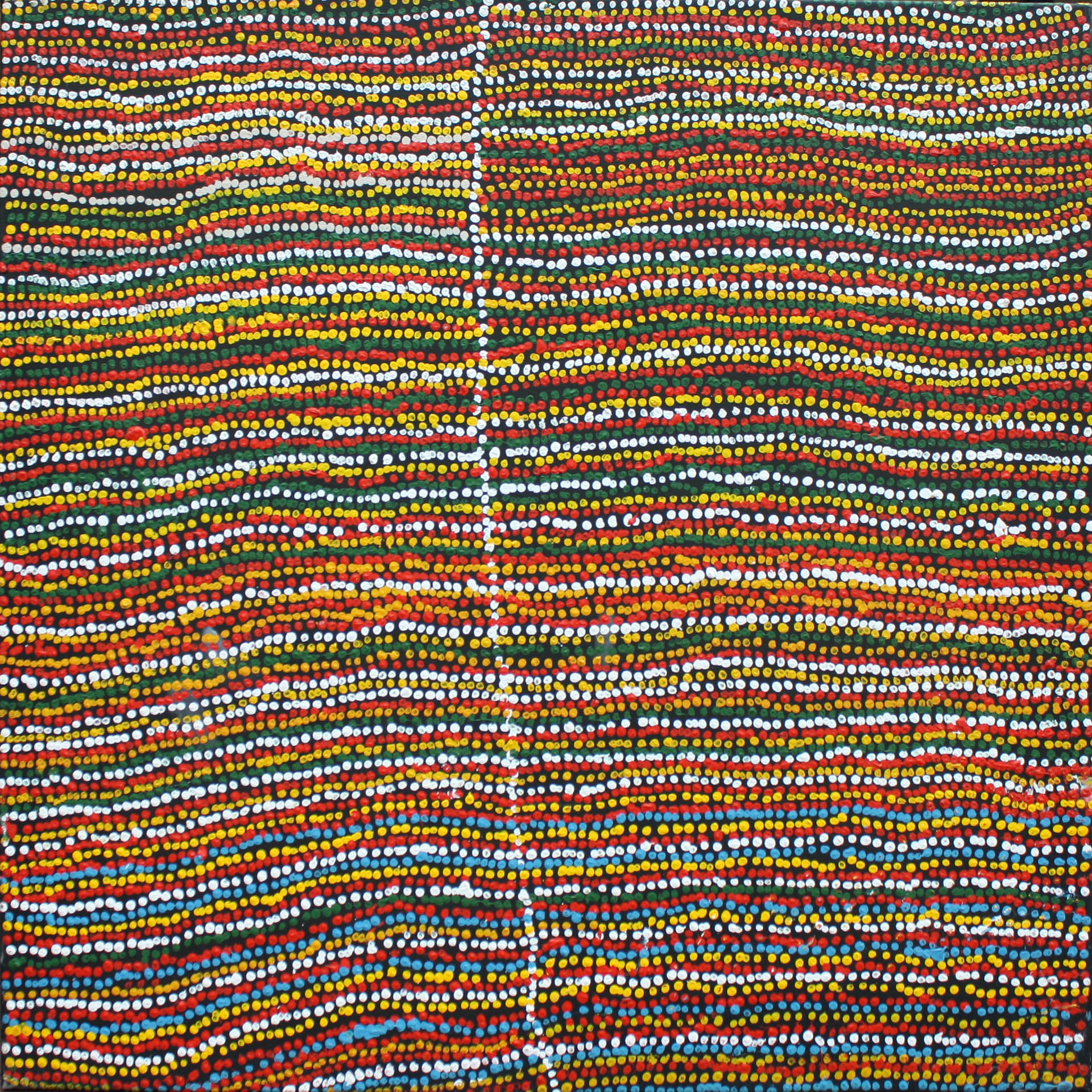 Jimmy was born near Ngatuntjarra Bore. He grew up as a bush baby in country around Blackstone and Mantamaru.

Jimmy has family links throughout the Pitjantjarra lands; his wife is from near Kalka. Jimmy brought his wife and children to live at Blackstone because of Jimmy’s tie to country here. He is widowed and has four children. Jimmy divides his time between Kalka and Blackstone.

Jimmy is a wonderful wood craftsman, his spears, spear throwers and boomerangs are prized and in much demand.

He is rich in story and a strong man for law and culture.

A quote from The Australian Art Review November 2006:
“His works are dazzling compositions of swirling, intensely-coloured dots, sometimes crossed by lines signifying the journey of the two snakes above and below the surface of the earth.”

These extracts from the web give a fair detail about Pukara rockhole:

Pukara is [my] grandfather’s country. It is a story about a sacred men’s site in Western Australia, south of Wingelina. It is a Watersnake Dreaming story. This is where the Watersnake fell down and his elbow makes an indent in the landscape. This is the creation story for the Honey Grevillea. Birds are really scared of this water at Pukara. It is like a “big boss”, this water.

‘This is a dangerous place, Pukara. There is a wanampi here (water snake). Wanampi kutjara (two water snakes), father and son. The two snake men saw that the Anangu women were collecting bush foods. The son snuck back to where the food was at night and stole all the food the women had collected. They saw him and speared him in the side. Tjukurpa mulapa. This is a true story. The two snakes still live at this place. The two wanampi, father and son travel from rockhole to rockhole in country around Wingelina. Kapi piti(rockholes). The two men travelled from Pukara to Kuru Ala and Nyumu. This is red sand dune country with rockholes and small rocky outcrops.’

About Pukara
Wati Kutjara Tjukurpa (the creation story for two serpent men). The two wanampi, father and his son travel from rockhole to rockhole in country around Wingelina. The father travelled away to another country and left his son behind at the rockhole Pukara. The people living there didn’t like the son. They thought he was sneaking around their camps at night while they slept and stealing their food. They thought he looked strange and could not be trusted. When the son grew up he came back to Pukara and ate all the people there.
Pukara Rock Hole is in sandy country where the Desert Heath Myrtle grows in abundance. The stories attached to Pukara are plentiful and link to great travelers from the Dream me. Snakes who are really men, who have traveled huge distances across country from as far away as Perth. A father and son, who finally come to Pukara where they stay, they are still there today. Jimmy’s paintings have a great deal of symbolism hidden in the dots. One can find the lay of the land, the seasonal flora that is plentiful at Pukara and stories of spearings, injury, recovery to health, dispute between the snake/men.

This article is a very comprehensive article about wanampi serpents & Pukara gets a mention:
http://www.flinders.edu.au/library/fms/word/Wanampi%20Rainbow%20Serpent%20of%20the%20Desert.doc

“Pukara, Wati Kutjara Tjukurpa (two snake-men dreaming). They are father and son. Wati wanapi (water-snake men). Tjuratja tjuta (lots of nectar). Ngayuku mamaku ngura (my father’s place). They travelled from rockhole to rockhole.”
Raymond often refers to Pukara and the Wati Kutjara Tjukurpa in his work. In this tjukurpa two water-snake men, a father and a son, travelled from rockhole to rockhole across the country. On their way to Pirulungka they turned into snakes. The son had big eyes and looked a bit strange. His father left him at a rockhole to live, but the anangu there did not want him to stay. They did not share their food, made it awkward for him to get water and were cruel to him. When the father heard how they were treating his son he was furious and went back and took the son away. The son grew up hurt, angry and wanting revenge. When he was a man he went back to the rockhole and ate all the anangu there – men, women and children – killing everybody except one man who was hiding behind a rock. As he crawled away he was so full that he vomited blood, fat and hair. The wati that was hiding speared the snake in the side and it split open. The two men are embedded in the country and the route that they journeyed, and where the snake was sick and speared have become landmarks.