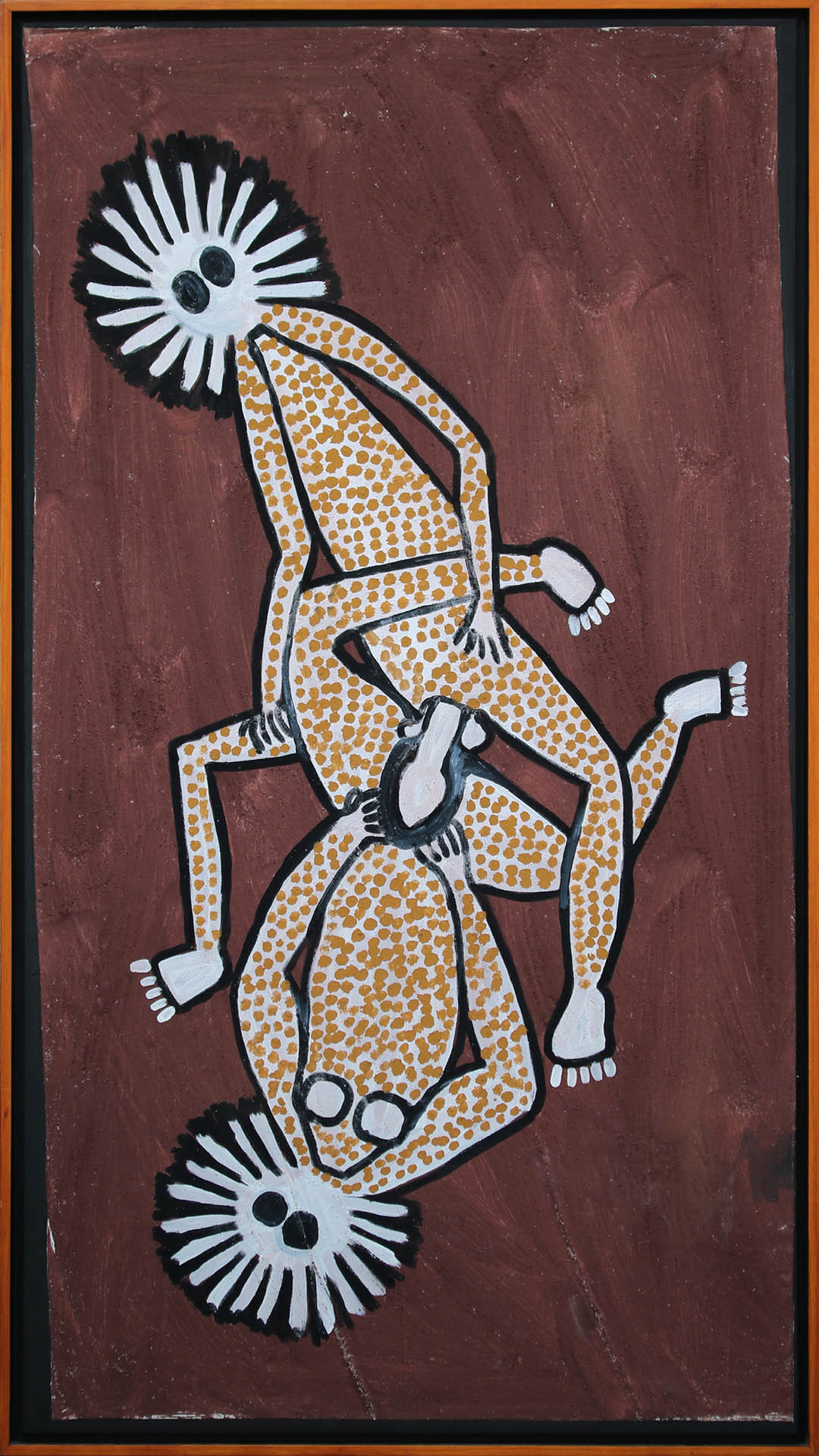 These boab nuts were carved by the late Jack Wherra a Ngarinyin man from the Kimberley in Western Australia. He began carving boab nuts whilst serving a jail sentence in a Broome jail. Boab nut carving is a tradition that the Indigenous people from the Kimberley have been practising for many years. Boab trees are indigenous to that area of Australia.

On 7 May 2008, Mary Anne Jebb, a consulting historian who works with Aboriginal people in the West Kimberley, spoke to the Kimberley Society about one of her current projects. She is exploring how boab nut carvings, and particularly those
done by deceased Ngarinyin artist Jack Wherra, operate as ‘objects’ or texts that not only represent historical events but also influence ideas, change values, and build relationships across cultures. Mary Anne provided the following summary of
her excellent PowerPoint presentation.

Jack Wherra was born in about 1920 in the bush and he experienced mission life at Kunmunya, on the Kimberley coast north of Derby, mostly with the relatively open-minded and well remembered Reverend JRB Love. But Love was not open minded enough to save Jack Wherra from spending 18 years in gaol over different periods, mostly in Broome, for murders that were labelled ‘tribal killings’, allegedly committed in 1940 and 1945. He received a pardon in 1963 and was released to
Mowanjum reserve outside Derby where his Worrorra, Wunambal, and Ngarinyin
relations had relocated in 1956. At Mowanjum he made his living carving boab nuts.
He sold carvings to tourists, visitors and teachers, plumbers, welfare, magistrates and others who were working or passing through Derby. He gifted them to white people who did him favours, or just as gifts.

Boab nuts were probably carved as gifts and exchange items before Europeans settled in the north Kimberley but this is open to debate. They are difficult items to date. The naturalist Saville Kent in 1897 and Basedow in 1916 described and
photographed engraved boab nuts from the west Kimberley. The Musuem of Victoria collection contains a carved nut from the west Kimberley apparently from the 1870s.
They are collected in April and May, when the shell is beginning to dry and harden. After that they begin to crack and can’t be used for carving. The nut is first rubbed in the sand to remove the outer layer of fur, revealing the brownish harder shell.
Using a sharp object the softer brown slightly furry skin of the nut is scraped away, in the manner of a linocut, revealing layers of the creamy hard shell beneath.
Experienced community carvers can often recognize what tool was used and who carved a particular nut from the style of the movements as well as the images or symbols. Artists only carve what they are permitted to carve through their culture.

In gaol, Jack Wherra carved boab nuts and gave them away or exchanged them for tobacco and other ‘luxury items’ like Phantom comics, developing his own style of narrative imagery. His detailed three dimensional images are framed story friezes presented like a comic book; the nut is divided horizontally and vertically, some having as many as 12 miniature framed images, to create vivid action narratives. The story contained in the frames is not always read across tiers or down columns. Some individual nuts will have a relatively self contained story while others have one image that links to one two or more other nuts.

In 1964 and 1965 an American anthropology PhD student, John McCaffrey, sat with Jack Wherra for months, and taped interviews and discussions with Wherra about his life story, his descriptions of some boab nut images and his extraordinary
visionary experiences. McCaffrey paid him for dozens of carved boab nuts. He returned to the US taking a number of Jack Wherra’s carved boab nuts with him. He died in 1998 and the art, carved nuts and reel to reel tapes were sold through
Sotheby’s in Sydney in 2003. The Australian National Museum in Canberra bought some, the Sydney Powerhouse Museum others. As a regular payer and constant supporter of Wherra drawing what he wanted, McCaffrey provided him with the means to make a series of images that were not sold off one by one at the local pub or to welfare, teachers and police. This series includes narratives on law breaking, punishments and legal chaos, violent acts by white men to Aboriginal people, punishments of men, and of women, pastoral work and life on the reserve; as he said on tape in 1965, a story of the ‘Kimberley Native’.

‘Repatriation’ to the community

Digital images of the carvings held in Sydney, Canberra and in private hands were displayed on a laptop computer for Mowanjum community members to interpret. After community consultations, five men and women became the community ‘working group’ also operating as a community ethics committee. Select images were shown and discussed by community members in recorded, semi-structured interviews and discussions of each image covered its aesthetic qualities, wider community history and Jack Wherra’s life story. Gwen Puemorra his granddaughter and (the late) Pudja Barunga were the main people who helped interpret the images and spoke of his life and times. The words are being used as speech bubbles to help bring the images back to life in the new art and culture centre displays.

These formal ‘repatriation’ sessions were recorded and transcribed to form an audio and written meta narrative. In the hands of the community, the images became deeply textured indigenous stories, places identified, events posited, relationships discussed. The words are being used as speech bubbles to help bring the carved images back to life in the new art and culture centre displays.

The stories told through the images retransmit Wherra’s pivotal life experiences and views on justice and injustice for his wider community. The carvings also take his stories into suburban living rooms to be translated and reinterpreted by non
Ngarinyin people; they move his knowledge across cultures.

Drawing people in to history using boab nuts as remembrance

Wherra was an active participant in crosscultural exchange, sending out these objects to be interpreted – in ways that he could not completely control, but with ‘hopes’ of communicating something to the recipients. Beside this being a means to
relive/reconnect/engage with and reproduce his own culture; earn some money, tell a story, have some fun, be creative, they also carry a political message of justice.
To use a term, recorded by McCaffrey in September 1964, as a direct quote by one of Wherra’s contemporaries, Wunambal artist and boab nut carver, Lockie Nollier, it is a ‘remembrance’. Nollier explained to McCaffrey, that if someone went to Kalumburu where many of his relations were, he would send something to them, like a carved shell. They are “rememberances”. The carvings are also Wherra’s personal struggle to explain how his past actions, fitted in the context of major cultural shifts that he was able to see and express as an Aboriginal historian using boab nuts to tell Kimberley history.