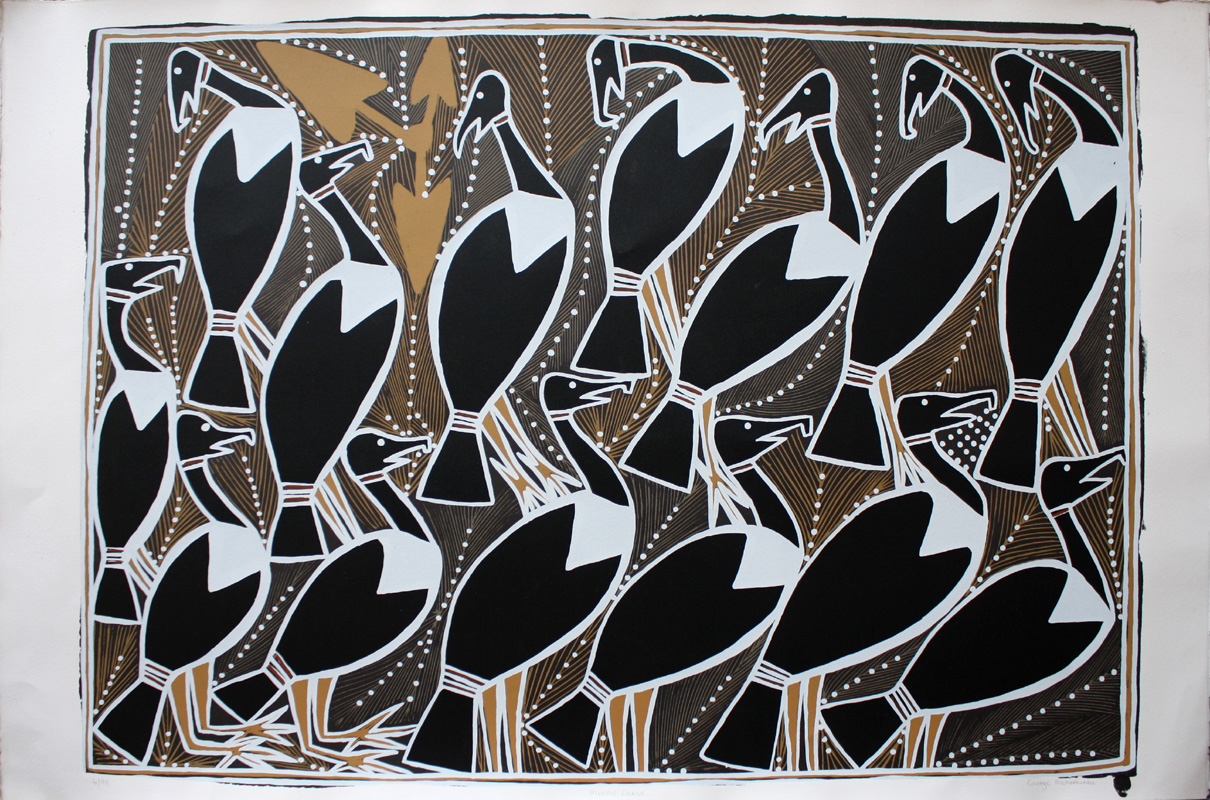 George Milpurrurru was raised in his father’s country Ngalyindi, the Ganalbingu outstation, which straddles a ridge to the east side of the Arafura swamp. The swamp, in the middle section of the Glyde River, is home to flocks of water birds, fresh water plants, snakes, and a rich array of other flora and fauna. This Eden became the wellspring from which Milpurrurru’s drew his artistic inspiration. He began to paint under the guidance of his father, Nhulmarmar and, as Judith Ryan observed, ‘Nhulmarmar’s art prefigures that of his son, Milpurrurru, in its capricious reversals of tone and patterning and its graphic power’. Indeed, Milpurrurru’s mastery over the play between foreground and background characterizes his paintings in which blocks of flat colour and intricate rarrk cross-hatching create a strong graphic effect. His style traversed stylistic conventions across Arnhem Land and sythesised these in to highly designed compositions. In doing so he drew on the aesthetic traditions of Western Arnhem Land artists, who applied cross-hatching solely within the figurative or schematic motifs of the work, while at the same time borrowing on the Eastern Arnhem Land convention of leaving figures unadorned, depicted in black against a heavily patterned background. Yet even in this variation, Milpurrurru stood outside Eastern Arnhem Land conventions in preferring to create complex arrangements of intersecting patterns.

He first began selling his work in the 1970’s, for just ten pounds, most notably to the mission superintendent at Milingimbi, Alan Fidock, and art dealer Dorothy Bennett. However with the establishment of Bula Bula Arts at Ramingining in the late 1970’s, Milpurrurru and others were enabled to establish successful artistic careers. Djon Mundine became the art adviser in the community and by 1979 one of Milpurrurru’s paintings, of men hunting in their canoes, was commissioned for the 1979 Biennale of Sydney.

The fact that Milpurrurru cannot be easily distinguished by a set of simple stylistic conventions is testament to his individual innovation. It is also, however, an indication of the lack of homogeneity amongst Central Arnhem Land artists, specifically during the 1980’s at Ramingining. Milpurrurru led pioneering leaps in redefining the structural parameters inherited by previous generations of artists, creating barks of grand scale, painted with piercing clarity, compared to the more organic and rudimentary works produced by artists of the previous generation.

One of Milpurrurru’s central narratives is that of the Magpie Geese; a Dreaming that lies at the heart of Ganalbingu ceremonial life. At the end of the monsoon period the Gumang (geese) lay their eggs. The Ganalbingu then venture out in stringy bark canoes to hunt the eggs. A ceremony called Gurrumbumbungu is held in conjunction with the hunting to ensure the geese will lay again. During the ceremony men perform the Goose dance with cooked eggs, which are later given to the women to rub over their newborn babies. Milpurrurru performed this dance as a ceremonial leader of his people for the opening of the 1986 Biennale of Sydney. The performance demonstrated the diversity of his creative output, as well as the intimate relationships between different aspects of Ganalbingu culture. Milpurrurru mastered not only painting and dance, but could also fashion his own canoes, woven fish traps, tools, and even his own house, each separate skill part of a holistic tradition.

George Milpurrurru and his contemporaries were attributed with placing Central Arnhem Land firmly on the art map during the 1980’s and 1990’s. Along with other Ramingining artists such as David Malangi, Jimmy Wululu, Jack Wunuwun, and Djardi Ashley, Milpurrurru was increasingly included in major exhibitions. Their zest to experiment by combining a diverse array of artistic traditions beyond those that were culturally prescribed gained them the public recognition that enabled Milpurrurru to take advantage of a blossoming gallery scene. He held his first solo exhibition in 1985 at the Aboriginal Arts Australia Gallery in Sydney a year before he exhibited in the Biennale of Sydney for the second time. Most importantly he was a major contributor to the 200-pole Aboriginal Memorial housed in the National Gallery of Canberra, the most significant Indigenous contribution to the 1988 celebration of the U.N. Year of Indigenous Peoples. In 1993 he became the first Aboriginal artist to be honoured with a solo retrospective exhibition at the National Gallery of Australia.