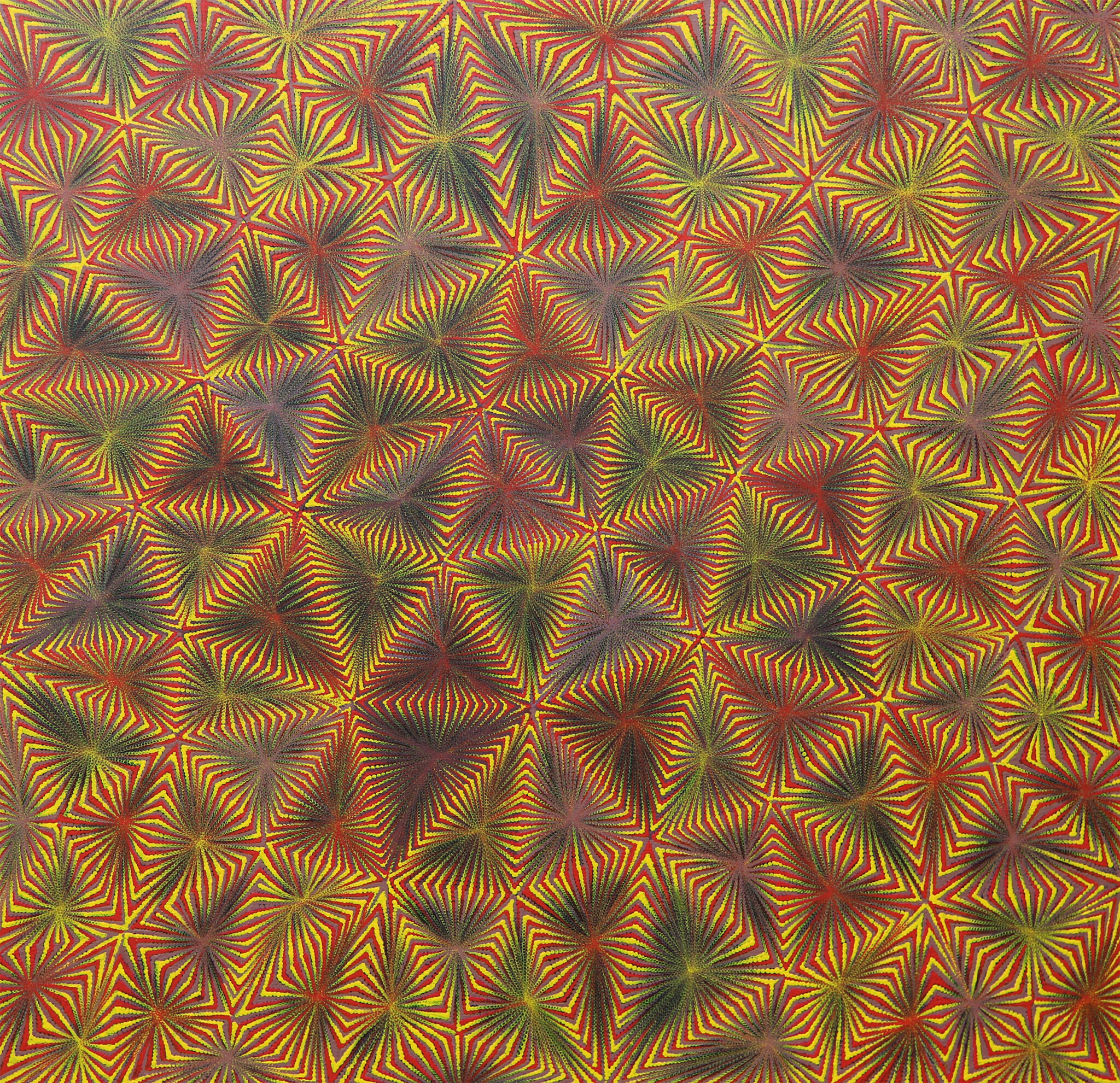 Fabrianne was born in Papunya on the 22nd of July 1965. Her mother, Maude Peterson Nungarrayi (now deceased) was born in 1937 at Napperby station, Napperby, NT. Maude was also an artist and painted Grandmother & Witchetty Grub dreamings and enjoyed making necklaces. Fabrianne’s biological father was an Italian man. Her step-dad Yala Peterson was a policeman at the Papunya Police-station and was a law man.

Fabrianne is a Luritja/Warlpiri woman. She attended pre-school at Papunya School and as a small girl she would play with her friends in the school playground. All the children would watch the old men painting the Honey Ant mural on the walls of the Papunya School with Geoffrey Bardon. Fabrianne remembers how happy everyone was. She moved to Alice Springs and attended Yirara College. She gained a very good education which was very important to Fabrianne.

In 1983 she was 18 and had finished College and moved to Mt. Liebig to become an assistant teacher at Watiyawanu School and worked there for about ten years. In her spare time she would paint for Papunya Tula Artists with Daphne Williams. The art centre co-ordinators would drop off canvas to Fabrianne in Mt. Liebig and collect them for their gallery.

While working with Papunya Tula Artists, Fabrianne suggested to Daphne to have a ‘Women’s Exhibition’ in Alice Springs at the old Papunya Tula gallery. This was really important to Fabrianne because she wanted to show the public how great the Pintupi/Luritja women were. Later, she also painted for Watiyawanu Artists of Amunturrungu Corporation in Mt. Liebig.

In 1990 Fabrianne lived for a year in Walungurru (Kintore) and painted alongside her mother-in-law Narbula Scobie Napurrula and she completed a Certificate in Video Editing. She then went to Utopia to spend time with her sister Eunice Nampitjinpa Peterson. Eunice taught Fabrianne different painting techniques like marbling.

In 1995 she gained a certificate of fine art from Batchelor College in Alice Springs and studied many forms of art making.

Fabrianne has her own unique style of painting. She works the canvases slowly and pays particular attention to detail as she creates fine movements throughout her work.

Fabrianne’s Wangunu (Bush Damper Seed) Dreaming & Willy Wagtail dreaming’s are from Mt Liebig which is Fabrianne’s country (the Nampitjinpa/Tjampitjinpa/Nangala/Tjangala skin group’s country). As Fabrianne was born in Papunya she also has the Honey Ant dreaming as everyone who is born in Papunya has this dreaming.
Her Bush Potato dreaming is from her step-dad Yala’s country of Kunatjarrayi (Mt Nicker).

Fabrianne is now a freelance artist working in Alice Springs. She is a dedicated mother of her own four children and one adopted son. She enjoys the pleasure of her culture, her country and is an active ceremonial participator and a Law woman.

Wangunu or Naked Woollybutt (Eragrostis eriopoda) is an erect perennial grass that grows in dense tufts to 35 centimetres. It is widespread and common in the arid zone. It is coarse and wiry, and has distinctive white “woolly butts” at the base of the plant. Wangunu is long lived, with each plant living up to 20 years. Seeding of Naked Woollybutt occurs after summer rain, with the seeds remaining on the plant for one or two months.

The seed from this plant is an important traditional staple food for the Central Desert people. The small reddish seeds can be easily collected by rubbing the seeds heads to remove it. It is first winnowed, then ground to a flour with a rock grindstone and water that feeds into a coolamon. The damper is made by cooking it in the ashes. This meal is very nutritious and keeps for a long time.