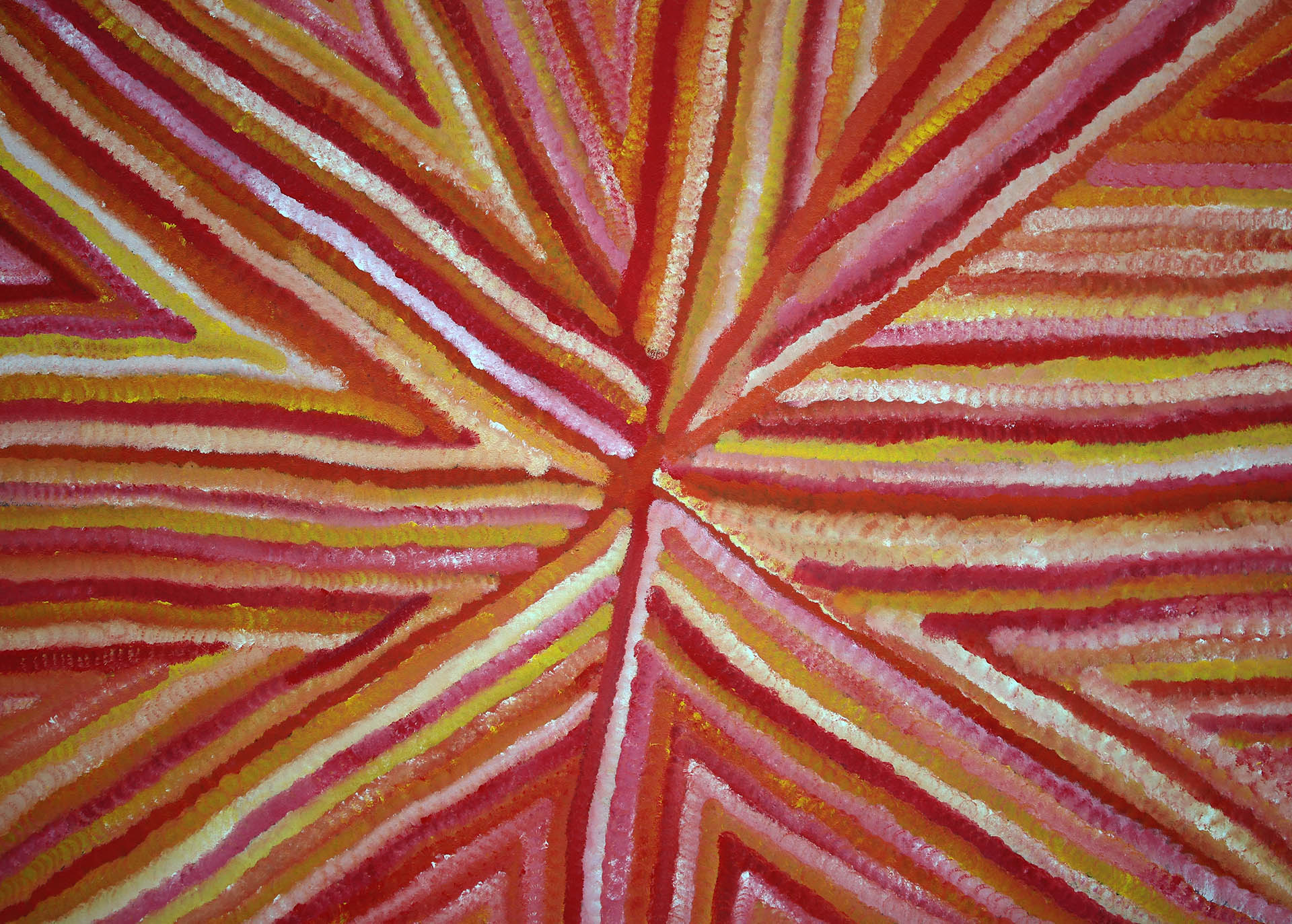 Evelyn was born at Woodgreen Station in the Utopia Homelands circa 1940. She is an Anmatyerre woman and the mother of six children. She and her husband, Clem Pultara grew up together and only moved from their traditional country when Clem took up a job as a stockman on a nearby property. Evelyn is a shy, quiet woman, whose confidence with a paintbrush seems at odds with her personality. She is the blood niece of the late Emily Kngwarreye and full sister to the respected lawman and well respected artist Greeny Purvis. Their parents were Jack Kngwarreye and Rosie Ngale. Evelyn’s correct name is Petyarre – not Pultara.

Evelyn began painting in 1997. From humble beginnings as a painter of more traditional themes such as bush tucker and awelye (women’s ceremonial body paint designs), she has progressed rapidly in a short time period. She now paints her plant totem, the bush yam, exclusively and employs a variety of styles to convey the story of her country and this native subterranean food source that forms a part of it. Her strength as an artist is largely defined by her exceptional ability to work with colour in a fresh and appealing way.

Evelyn divides her time between painting and caring for her adult son Luke who suffers physical and mental impairment. In recent months she has hosted a French film crew making a documentary on Aboriginal Art and a group of journalists from a prestigious American publication doing a similar piece, each of whom were astounded by her paintings and requested to meet her. Prior to her winning the General Painting award at the 2005 Telstra NATSIAA awards, Evelyn has had solo exhibitions in both Sydney and Milan and her work has featured in several group exhibitions around Australia. Subsequent solo exhibitions have enhanced her profile.

Evelyn Pultara was born during the outbreak of World War II at Woodgreen Station, the cattle property adjoining Utopia Station and has now become a senior custodian for her Dreaming the bush yam. She began painting traditional bush tucker and awelye (women’s ceremonial body paint designs) in 1997 but went on to exclusively paint her plant totem, the bush yam.

While rarely indicating any more than necessary about the context of her paintings their content is the pencil yam (atnwelarr) a slender twining plant with yellow pea flowers and edible tubers. This has been an abundant source of food for her Anmatyerr clansmen since the dawn of creation and it is her responsibility to pay homage to it through song and dance in ceremony – and now in art.

Her Dreamings, related through haptic adventures in paint, relate the tales of the mythic totemic ancestors who made the land, its people, and its food. Through their telling and retelling and the depiction of their sites in art, these Dreamings provide a song-map that locates the water holes, ochre pits, food sources, and sacred sites of the artist’s country. It has been said that her paintings impart the rhythm of the yam corroborree enacted and retold for time in memoriam through song and dance.

While Evelyn’s work has been exhibited since the late 1990’s her first solo exhibition was held at the World Vision Gallery in Sydney’s Leichardt. This was followed in quick succession by solo shows in Milan, Sydney and Melbourne. In 2005 she was won first prize in the General Painting section of the 22nd Telstra National Aboriginal and Torres Strait Islander Art Award at the Museum and Art Gallery of the Northern Territory, Darwin.