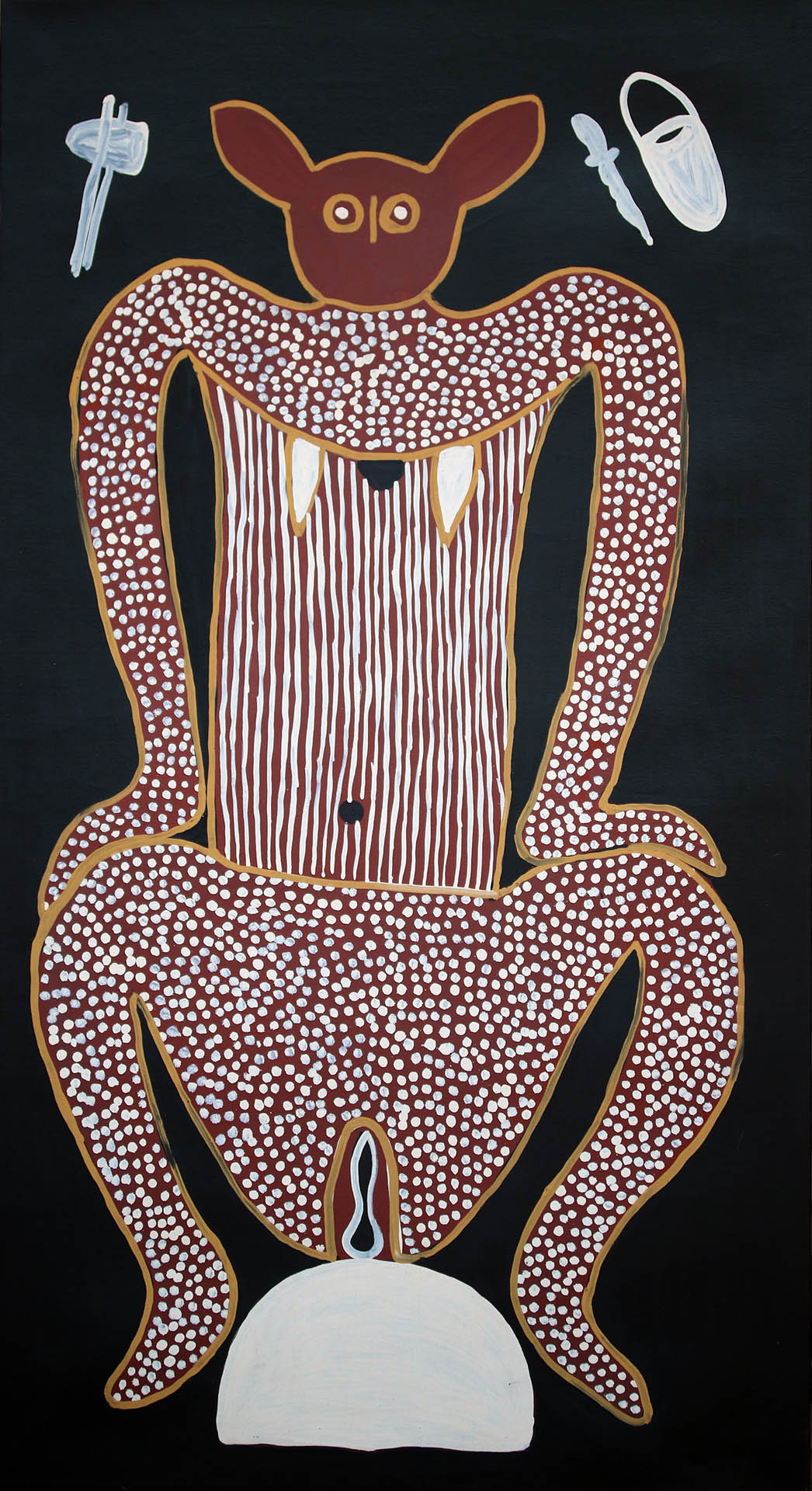 David Mowaljarlai was a senior traditional lawman of the Ngarinyin people in the West Kimberley, Western Australia. Not only he was an extraordinary painter, he was an anthropologist, teacher preacher, story teller and linguist. He grew up on a mission and for several years during his childhood he was a patient at the Derby Leprosarium. During this time he learnt to play the violin and became a mechanic.

Mowaljarlai underwent various stages of Aboriginal initiation. He worked as a skipper on a pearling lugger, a male orderly, a construction worker during the Second World War and a truck driver. He also managed his people’s Arts and Craft industry.

As an important leader in his community, Mowaljarlai both influenced and campaigned for his people to be respected. He was one of the first to be an ordained elder in his church and was deeply concerned for both the preservation of his culture and peaceful co-existence between black and white communities.

During the 1970s and 1980s, he held seats on the Aboriginal Arts Board, the Western Australian Museum Sacred Sites Board and the Institute of Aboriginal Studies in Canberra. He married Turki Mowaljarlai and they had six children.

From The Berndt Museum, UWA – exhibition notes:
A Ngarinyin man, Mowaljarlai was born in 1925 at the Kunmunya Presbyterian mission in the northwest Kimberley and raised in both Ngarinyin and Christian religious traditions. He was a member of the Brrejirad (Pink Hibiscus) sub-group whose traditional country is in the Roe River area of the west Kimberley. Mowaljarlai’s life was always marked by a facility for walking in two worlds. An arresting photograph taken by German anthropologists in 1939 shows Mowaljarlai as a young boy, even then noticed for his engaging personality. In his young adult years he spent time at the leprosarium in Derby, where he learnt to play violin in the community orchestra. He assisted in the translation of the Bible into Ngarinyin, as well as in the development of a Ngarinyin language dictionary and during WWII helped locate Japanese airmen who had been shot down over the Kimberley.

In later life Mowaljarlai, along with three other senior men, worked to establish the Bush University, to facilitate the education of non-Aboriginal people on traditional Ngarinyin Law, art and spiritual orientation to the natural and unseen worlds. If we share the stories of our country with gudia (whitefella), then they will have our country in their hearts as we do, and they will understand and love it, and never damage it.[i]

The roll-call of researchers, law-makers, authors and film-makers who benefitted from his status as a north-west Kimberley cultural authority and his willingness to engage in national and international political and academic arenas include Andreas Lommel, A.P. Elkin, Ronald and Catherine Berndt, Howard Coate, Arthur Capell, Peter Lucich, Michael Edols, Jutta Malnic and Jeff Doring amongst others.

From around the 1990s, Mowaljarlai produced many paintings on canvas and drawings recording the evolution of Ngarinyin law from Creation Time to the present. He is also known to have painted on bark in the 1970s. Much of this work has not been seen by the public, so the current exhibition offers a rare opportunity to view examples of his artistic output alongside audio-visual material, photographs and other material bequeathed by the late researcher Hannah Rachel Bell.

Even by the standards of the many remote Aboriginal community and cultural leaders who work so tirelessly for Aboriginal advancement. Mowaljarlai is a remarkable figure. This list of accomplishments gives only a one-dimensional impression of the man himself however, who managed to achieve all this while carrying heavy personal burdens and deep concern for the future of his people. He died in 1997 after a life devoted not only to the maintenance of his people’s Wanjina Wunggurr culture, but also to the cross-cultural teaching so necessary for developing settler understanding of the integrity and continuity of Ngarinyin heritage and Law.

When I’m on a high mountain looking out over country
my Unggurr (life-force) flows out from inside my body
and I fall open with happiness.[ii]