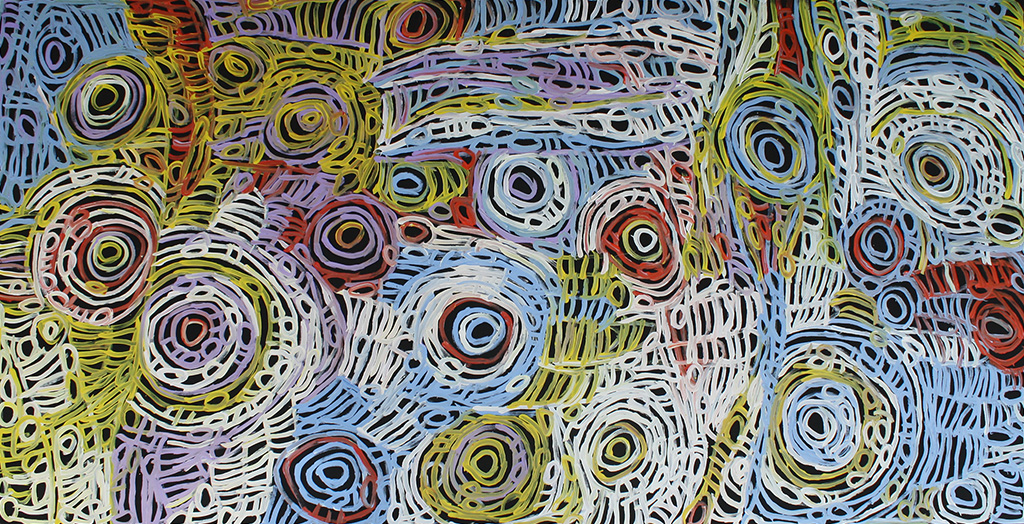 Charmaine Pwerle is the daughter of Barbara Weir, who is a leading Indigenous artist from the Utopia region in Central Australia. Charmaine comes from a family with rich artistic talent; her grandmothers include Minnie Pwerle and Emily Kngwarreye, Emily being the most famous Indigenous artist from the Utopia region. With all of this artistic flare surrounding her; Charmaine has been able to draw on the teachings of her family to create beautiful and culturally significant works of art in her own right.

In 1992 she returned to Utopia as a young woman and worked at the Urapuntja Council as a junior administration assistant and lived with her mother and grandparents Minnie Pwerle and Motorcar Jim at Soakage Bore which is the family’s homeland. This is now called Utopia Station.

During her time at Utopia Station she learnt about her heritage, culture, ceremonies and the sacred stories from her land, all of this important knowledge was passed onto her by her grandmothers. She was taught traditional Aboriginal iconography used in physical depictions of her Dreaming stories. It is this sacred and important knowledge which is the inspiration for her art. In doing so she is carrying on the family tradition of an artistic career. She has the same artistic vision as her mother and it is in her veins, like her brother Fred Torres and sister Therese Purla.

Charmaine’s artwork is very well executed. She paints the same Dreamtime story as Minnie Pwerle and there are similarities between their works however Charmaine’s appear more practiced and confident. The patterns and movements of the artworks are unique to her and the overall design works well. Charmaine’s Awelye paintings depict women’s business which is all of the important knowledge, ceremony and roles of women including the law, social and moral customs, rites and ceremonies. The actual paintings represent the body paint design which is worn by women during these ceremonies. These designs also mirror dancing tracks which the women would follow during ceremonial periods.

Charmaine lives in Alice Springs with her partner and her four daughters and step-daughter. She is dedicating more time toward her art and is under the guidance and support of her mother Barbara. It is important for Utopia that not only the Dreamings are passed on through generations but the artistic skills and sacred iconography is passed down through the generations, with each generation taking the rite of passage to receive the sacred knowledge. Charmaine is now a third generation artist and as an art lover it is exciting to see the evolution of art from Utopia and each generations and individuals unique expression of significant Dreamings.