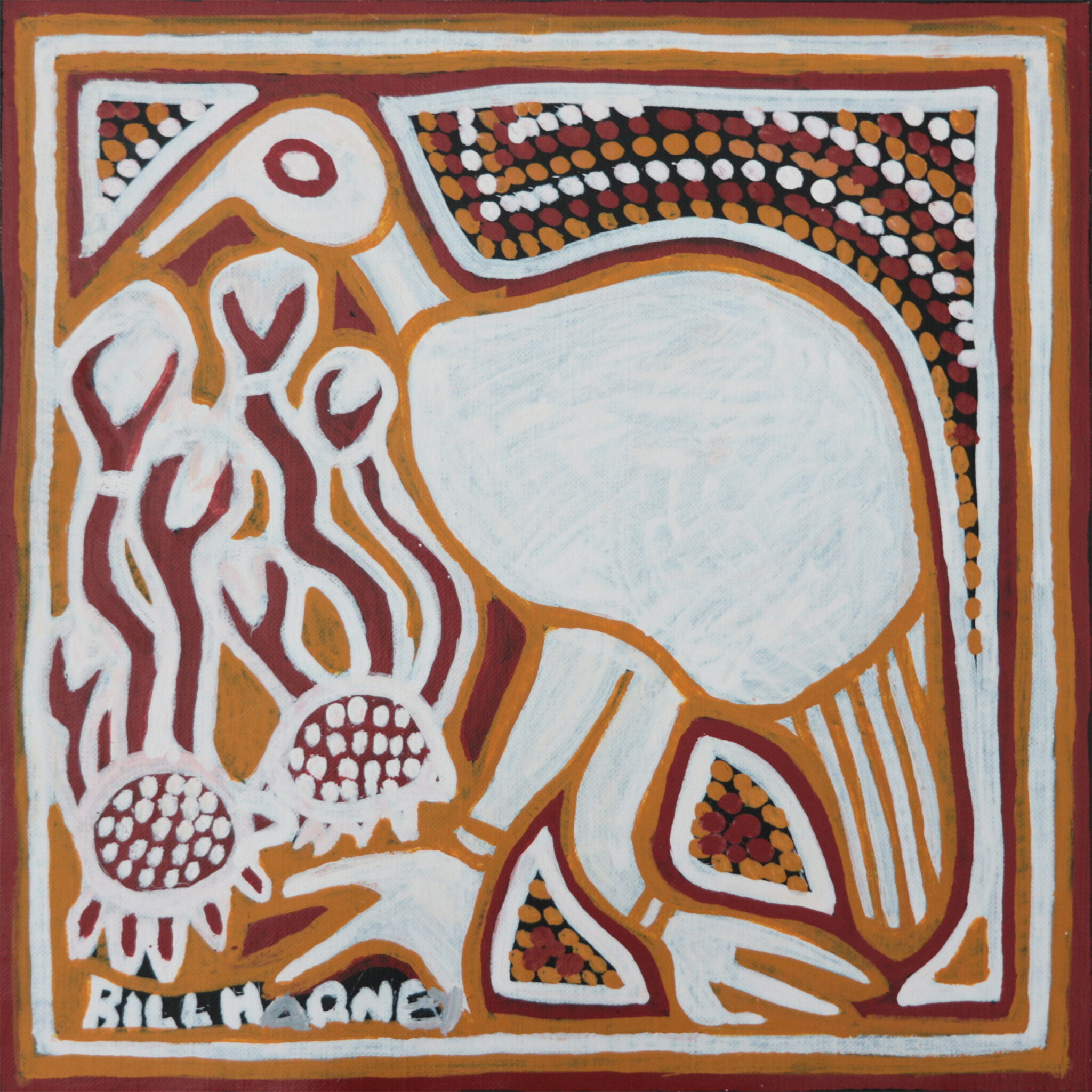 Yidumduma Bill Harney is recognized throughout the world as an artist of high esteem on many different stages. He is a Master Storyteller, Songman, Didjeridoo Player/Maker, Painter, and Writer. All his art forms have the deepest roots in the celebration of his Wardaman Aboriginal heritage and his unique ability to “walk in both worlds” and communicate the joy of his culture to a global audience.

Yidumduma grew up in the “Bush University”, undergoing the fullest Wardaman ceremonial traditions and education. He was “grown up” by old Joe Jormorji, his Aboriginal step father, and his mother Ludi Yibuluyma. His white father was the infamous master storyteller and writer Bill Harney with whom young Bill had little contact growing up. Being of mixed descent, he successfully evaded being a victim of the “Stolen Generation”, and continually avoided being taken away from his Aboriginal upbringing by the government.  Growing up in the early 30-40’s on his traditional lands, young Yidumduma worked 6 months with the rest of the Wardaman on cattle stations and then 6 months going walkabout continuing his ceremonial Bush University education. Wardaman country houses hundreds of internationally recognized rock art sites, in particular the famous Lightning Brothers site, where the children have been educated for thousands of years through song, story and painting.

Today Yidumduma is the last fully initiated male Custodian of his people, the last male “Emeritus Professor” of his culture. He speaks 7 languages. His latter life has been filled with walking in both worlds as a successful Aboriginal businessman, actively working to win his traditional lands back to continue the education of his grandchildren, sharing his culture with hundreds of world visitors to his art sites.

As an artist his work is deeply rooted in this education he received growing up, the songs, stories and paintings as passed on from the ancestors from the Dreamtime.  He has been formally acknowledged as one of “Australia’s living national treasures” and his knowledge has been described by anthropologists as “encyclopedic in nature.”

As a writer, he is a co-author of 2 books, ‘ Born Under the Paperbark Tree’ (1996), an autobiography of his amazing life, and ‘Dark Sparklers'(2003) with Hugh Cairns, which shares the incredible beauty and depth of the Wardaman star knowledge and cosmic worldview. He is currently working with Hugh on a third book articulating the depth and complexity of Wardaman Customary Law.

Yidumduma grew up painting and formally entered the world art stage in 1988.

He has been a finalist 19 consecutive times for the National Aboriginal and Torres Strait Islander Telstra Art Awards. He has works all over the globe, paintings in the National Gallery of Australia, the Federal Parliament and the Northern Territory Legislative Assembly.  In Oct 2008 Yidumduma presented a master work to the Law Faculty, University of Sydney. He is represented by Art Mob in Tasmania.

As a performing artist he has performed at the Sydney Opera House, Sacred Music Festival CA, Joshua Tree Didjeridoo Festival and the UC Fiske Planetarium in Boulder Colorado.