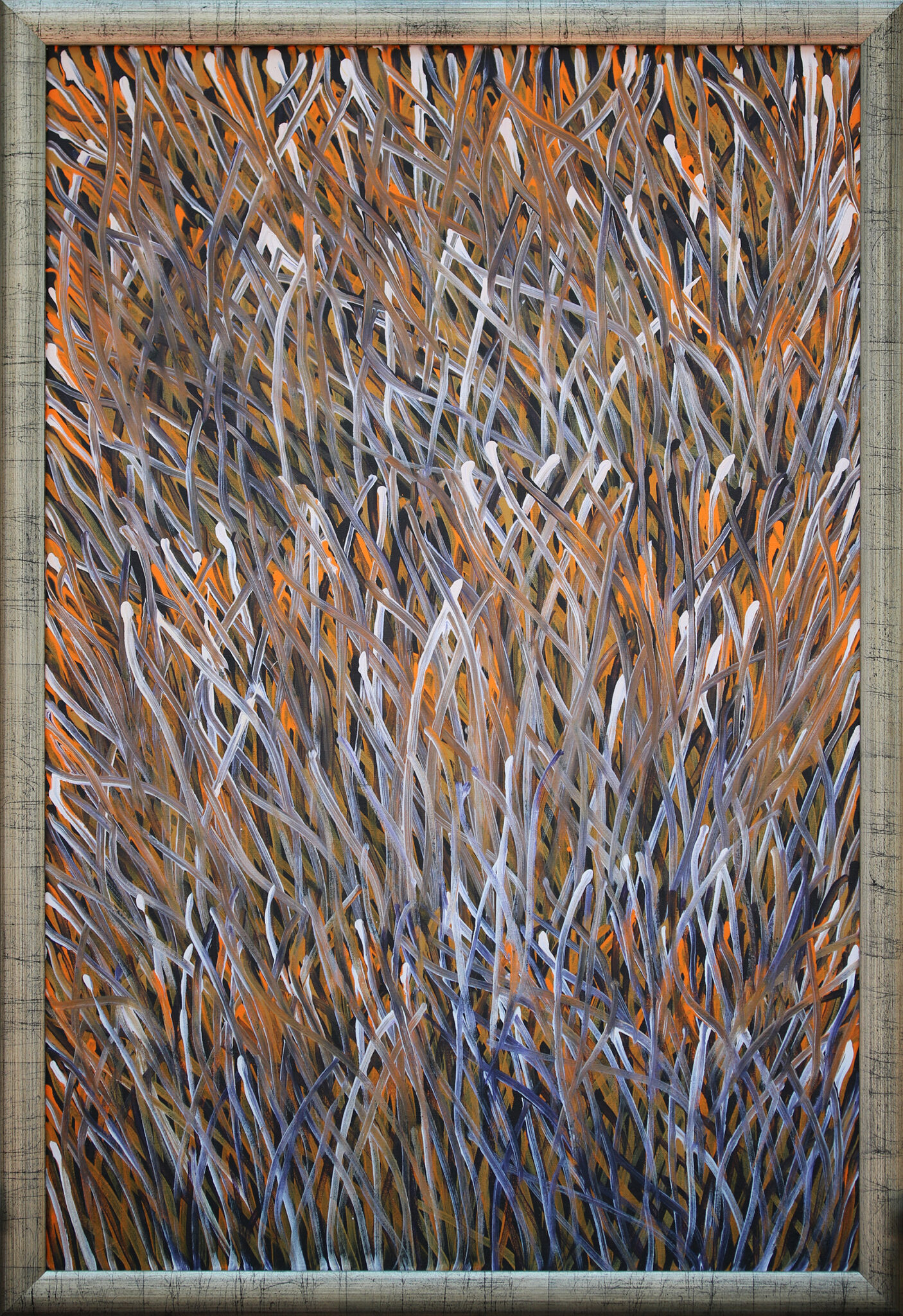 Barbara Weir was born circa 1942 at what was formerly known as Bundy Station in the Utopia region. She is the daughter of highly acclaimed artist Minnie Pwerle and Irish stockman Jack Weir who owned Bundy River Station at the time. Bundy River Station was a cattle station. Her country is Atnwengerrp and her language is Anmatyerre and Alyawarr. She is a strong, independent, self-motivated and determined woman and all of her accomplishments to date are a true reflection of this amazing woman.

Given Barbara’s mixed heritage and under the Aborigines Protection Amending Act of 1915, the anti-miscegenation racial laws at the time, her parent’s relationship was deemed illegal and both were jailed for a period of time and Barbara became part of what the Australian public now refer to as the Stolen Generations. Jack Weir passed away shortly after his release.

As a young child Barbara was raised in the Utopia region with her mother and extended family, her aunt the famous Emily Kame Kngwarreye played a large role in raising Barbara as a child. She was often hidden from government and welfare officials. It was their role to locate and take into custody any child of mixed heritage who could be assimilated into “white” society. Her family did a marvellous job for a period of time however at age nine Barbara was located and removed from her family. She was placed in various foster homes and group homes in Alice Springs and throughout Australia. During this period Barbara was forced to forget her native tongue and was told her mother and family were dead, likewise her family also believed that after her removal she was later killed.

It wasn’t until the 1968 that Barbara returned to Alice Springs and the Utopia region to be reunited with her mother and family. The reunion was highly emotional as to be expected but brought significant challenges as Barbara no longer spoke her language. This did not discourage Barbara who over the following two decades mastered two Aboriginal languages – Anmatyerre and Alyawarre, which is a huge credit to her as to learn both languages from scratch is no small feat. During this period Barbara reconnected with her aunt, Emily Kame Kngwarreye and re-established their bond.

It wasn’t until 1977 after her divorce that Barbara returned to Utopia to live with six children. During her time there, Barbara became active in the local land rights movements and was elected the first woman president of the Indigenous Urapunta Council in 1985.

Barbara did not begin painting until 1989 after spending significant periods of time observing her aunt Emily Kame Kngwarreye; who had a profound impact on her. She began to explore the artistic traditions of her region and five years later, in 1994, she was part of a group of 10 Utopian women who travelled to study Batik, or silk painting, in Indonesia. At this time she began to seriously explore her own individual talents and styles and has used the traditional knowledge she has gained and experimented with her own interpretations. In 1996, Emily Kame Kngwarreye passed away, at this time Barbara who was still exploring and developing her skills began to attract attention from collectors around Australia and overseas. Her now famed Grass Seeds artworks were considered contemporary and unique.

Coming from a family group and region which has some of the most outstanding female artists, Barbara has become a well-respected and highly sought after artist in her own right. Her artworks have been exhibited widely throughout Australia and internationally and have been collected by major institutions. Not only has Barbara established herself as a top Australian Aboriginal Artist but in 2000 she also began managed her elderly mother’s career.

In 2002, Barbara again made the move back to Alice Springs and continues to live here today. She visits her homeland regularly. She is a highly talented and skilled artist who uses a variety of different styles to depict her family connections, life experiences, and Dreaming stories. She continues to lead the way in developing new and exciting ways of creating stories through art.

Some other accomplishments of Barbara’s include being featured in an advertisement for the Australian Tourist Commission, titled “Barbara Weir’s Australia” and being listed in the Top 50 of Australia’s most collectable artist by Australian Art Collector Magazine in 2009.

Barbara is a versatile and passionate artist whose love for the country is reflected in each canvas she paints. She is highly skilled in the use of dot work shown in her depictions of ‘My Mothers Country’, and is ingenious in her use of lines and texture as shown in ‘Grass Seed’ dreamings.